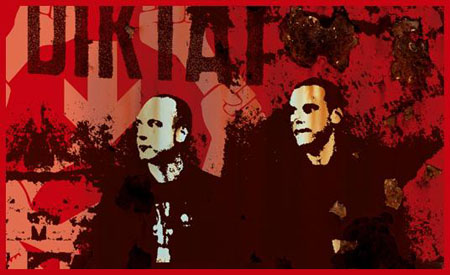 Since 2001 the music of Le Diktat (the joint project of Thomas P. and Benoit G.) has been nourishing itself with references found in the spheres of music (industrial, hip-hop, ambient, noise), politics and visual arts. After the release of their critically-acclaimed debut album, the Orwellian influenced “2+2=5”, Le Diktat are back in 2008 with a new album. Titled “Unabomber”, it is inspired by the neo-Luddite movement and the life of American terrorist Theodore Kaczinski.

1 – Can you give us a brief overview of your musical career? How did Le Diktat come to be?

Le Diktat was born in 2003 as a solo project first. I used to organize industrial parties and to mix this way and that under the name of DJ Kortx. So I naturally evolved towards composition and live performance. When the opportunity came to release “2+2=5” (the first album) I proposed to my long-standing friend Benoit – with whom I was already making music – to participate in the project and in the creative process of the tracks.

2 – How would you describe your music?

It’s a mix of our different influences: industrial, noise, hip hop, drum and bass, dark ambient, breakcore… We generally develop very dark atmospheres, heavy and distorted rhythmics along with scratches, sampling and breaks to create an urban and massive sound.

I would say that we went further with exploration and experimentation, generally speaking “Unabomber” is richer than “2+2=5”. We allowed ourselves to go further with tracks that border on experimental music (“Fuck all computers”), other striving towards drum’n’bass (“Cold Fusion”) or industrial raggacore (“TRYRB”). Nevertheless, this new album is related to the first one as contestation and revolt are the main themes as opposed to the totalitarianism and arbitrariness of “2+2=5” which was inspired by Orwell’s “1984”. 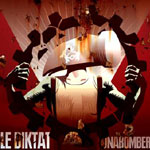 4 – Why did you choose Théodore Kaczinski (aka “Unabomber”) as the central theme of the album?

I recently became very interested in the history of the English Luddite labor revolt and, consequently, also in the neo Luddite movement which lauds economic decline, anti-industrialism and anarchistic primitivism more generally. Even if we do not believe in the whole ideology that is underneath, figure of the Unabomber is fascinating in his extremist and uncompromising struggle against an advancing world order which, in its own way, is also extremist…

5 – Tell us more about your collaboration with your graphic designer Metastazis.

J.E. from Metastazis had already worked on the artwork for “2+2=5”, he immediately understood and graphically translated our identity. Consequently, it was inconceivable for us not to charge him with doing the artwork for “Unabomber”. He’s really talented and his work is very striking.

6 – Have you ever thought about recording voices on your tracks?

It’s true that so far, and with one exception (the cover of Berurier Noir’s “Les Rebelles” for the online compilation “Le mouvement de la jeunesse électronique”), we’ve never integrated voices on our tracks until now. It may change in the future.

7 – Why did you choose hip hop lines as a basis for your music?

Let’s say that we both have hip hop influences. On the other hand, the industrial and hip-hop marriage of artists such as Meat Beat Manifesto, Scorn, Techno Animal strongly influenced us!

8 – What would be the ideal conditions for Le Diktat on stage?

Then we’ve often been proposed video projection, it’s a good idea even if it’s always complicated to carry it out according to the place we play. 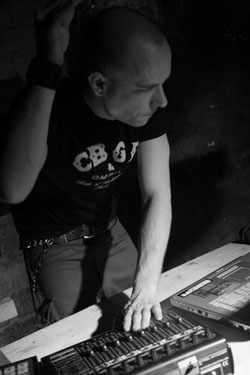 9 – How do you perceive the actual French political context?

We’re in a hateful situation. I have the feeling that the social climate is getting worse year by year and I am despairing waiting for it to crash.

The peole chose to elect politicians who promised everything and anything… it is therefore the phase of disappointment which was predictable by now. Whether at national or international levels, I do not see things evolving positively.

10 – What are the films that inspire you?

11 – “Fuck all computers”. That’s what is written on your myspace page, how should we interpret that sentence?

It’s also the title of the album’s last track. It’s again a wink to Unabomber who used to sign his anonymous letters with “F.C.” for “Fuck all Computers” because he considered technologic progress as an imminent danger for humanity. We pretty much like that sentence for its radical aspect but also for its double meaning, the opposition between the digital world and the analogical universe.

This opposition is also a key element of our configuration within Le Diktat because we are fond of analogical synthesizers that we use a lot (Roland SH 101, Polyvox, MS20…) without denying the flexible aspect of softwares.

A huge multinational and 10 billion slaves.

13 – Are you adepts of conspiracy theories?

I believe in some at least… It’s always hard to be categorical. Let’s just say that we question official versions – whatever they may be. As such, we develop a high distrust about political questions. The current event in general does not really incite us to be trusting.

14 – Is there at least some hope conveyed in your music?

I don’t think so. That is not what we aim at.

15 – Are you already thinking about the third album?

We haven’t talked about it yet. For the moment I dedicate myself to the composition of a dark-hop/dubstep album with my friend Cdrk (Axiome, Kirdec, Dead Hollywood Stars…). It’s in preparation from a long time now and it’s evolving seriously. I think it would be finished in the begining of 2009.

16 – Why is Le Diktat represented by one single person on stage?

It’s true that we are often questioned on it. As I told you, Le Diktat was a solo project first and this was true for the stage too. When Benoît joined Le Diktat we’ve established a live configuration with the two of us for some dates. But because of the geographical distance and the fact that Benoît was finally less motivated by live performances than by composition I returned to a solo configuration with a quite different and more personal tracklist.

I think so! We have had some other contacts with other record labels without asking them. But we naturally chose Audiotrauma.

Firstly, for me, because it is one of the most active and prolific French labels. We are fans! And then because we share the spirit and philosophy of the Audiotrauma collective. We participated in the two Noxious Art Festival editions and in the support compilation as well. We feel close to the label, both humanely and artistically.

“I’ve heard of an album/collaboration released this month with Babylon Chaos and Lambwool on the OPN Label. Can you tell me more?”

“(Laughs) You are very well informed you know!”

In fact it’s a digipack album released with Lambwool (Divine Comedy Records) that is a great dark ambient project and Babylon Chaos (OPN records) that is more industrial noise. We’ve been remixing each other and the result is quite astonishing. It’s a mix of ambient, experimental, noise breakcore, hip-hop and industrial. In short, a very good experience.