“Ukrainian label run by Dmytro Fedorenko (Kotra), started at the end of year 2006, with the aim to amplify the electronic experimental outputs from the land of Ukraine and to discover new musical variations from the outer world. Kvitnu concentrates on music and ideas with a high blood pressure in its sound-veins.”
– adapted from the Kvitnu website 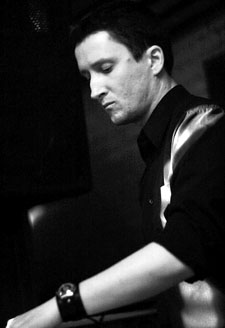 1 – How and why did you come about starting Kvitnu?

For a very long time I was dreaming about an idea of creating clear space, with pure and non-compromise art and people that shared the same ideas. I needed radicalism in attitude and process, maybe even more than radicalism with sound. And after some years of working with different projects, running and co-running a few labels and producing festivals and concerts, I’ve finally brewed and formulated to myself, what form this space must be for me, where should I go and whom should I work with. Also I had some changes in my music tastes and attitude to material selection. And I realised that first of all I must re-start many things in my own life from zero, and to create everything from the very beginning, again, because I was afraid that any possible transformation of previous works would not bring that clear state of things for me. So I had to quit almost all projects I was involved in, and Kvitnu was created.

2 – When you started Kvitnu, were there any labels that you could say were a reference/inspiration for your efforts?

I tried not to think of any other labels as inspiration examples, to keep my head and feelings as clear as possible from any references when creating Kvitnu. I was thinking that this is the only way not to start the same old game but just with a new name. Of course there are some persons whose work I admire, but they were not an inspiration.

3 – Almost mandatory question, how did the name “Kvitnu” come about?

“Kvitka” means “flower” in Ukrainian, and “kvitnu” is a verb meaning a process of “blossoming”. In our language, it can be associated not just to flowers but to almost anything that is in a state of natural transformation and growing. So, for me, it is like a symbol of free energy and movement in a healthy growing organism.

4 – Since the inception of Kvitnu, are there any events in the history of the label that you’d consider as particularly relevant, from difficulties and setbacks to successes?

If one is to talk about concert events, then the first really successful event from us was Kvitnu Fest, which we started last year in Kyiv and will continue in October 2008 in Lviv. The first edition of this festival was about Ukrainian experimental music only and it overwhelmed all our biggest expectations. For the very first time it was possible to hear many Ukrainian artists performing during one night. And after the first Kvitnu Fest I can finally say that we do have really interesting and growing scene in Ukraine with maybe not too many, but very interesting well-known and young artists. It was a kind of a good sign for me personally. And this year Kvitnu Fest will have an international format and will be the biggest experimental music festival in Ukraine until this time.

The second major event happened when In January I invited Scorn to perform in Kyiv. It was the first time that I was inviting only one artist to play as guest. And it was extremely great! After this concert, I plan to make regular events with different artists, to fill spaces between festivals in Ukraine.

Natural difficulties are maybe only routine questions regarding distribution problems, but I am realist, so as for a young label I think we are doing really well, as we already found partners in few countries and just signed a contract for global digital distribution.

5 – So far what would you consider as special highlights (or successful) releases and artists in the history of Kvitnu?

Regarding releases – we only have five CDs so far, so I hope and feel that I managed not to make mistakes during this short period and we don’t have a weak one now! They are all very different and very powerful, so I must say that any of those five is a pure gold to me!

Actually that was one of main ideas when I was starting Kvitnu – to release only music I am 100% sure about its energy, ideas and quality, even if Kvitnu will not have new releases very often. But I hope not to have bad memories and regrets while looking back to the Kvitnu catalogue in a few years…

And if to say about most successful artists on Kvitnu – now it’s Zavoloka of course. She is doing really well now with her art.

6 – Are there any releases in particular that you would recommend as good ‘introductory material’ to the Kvitnu label?

I think if one will try “Viter” from Zavoloka, “Xquisite.Xcerpt.” from Dunaewsky69 and “Reset” from Kotra, it sould bring some ideas about us. All those artists will have their music released again on Kvitnu, and their albums already show the way we want to talk to listeners.

No, there is nothing to regret. In fact, over and over again during past two years I feel that starting Kvitnu was probably one of the best decisions of my life, and I see that each new project on the label, every new idea, each new day we exist brings us a 100% proof of the right steps we take.

8 – An obvious question, but what is Kvitnu’s ‘relationship’ with the Internet? From promotion tool and digital sales to file sharing and piracy, how has it affected you?

Our friendship with the Internet is only growing!

I like to see how the Internet transforms everything where it comes to. It forces artists and labels to think really hard about their future and to develop new communication ways inside of this sea of communication. And I believe that there will be some interesting surprises in near future for all of us about ‘music and Internet’ in general.

I don’t see any really bad influence of Internet on Kvitnu, only good. From one hand I wish our releases to be sold as CDs of course, but from another – I don’t see anything bad about file-sharing and I don’t believe in problems from web-piracy for Kvitnu. I also strongly don’t believe that sharing affects on sales that much. If you can find Kvitnu releases for free and you are satisfied with their quality – good for you.

The Internet brings amazing possibilities for those who want to use them and are not afraid of change. More open space is always better, I guess.

Difficult thing to say… My vision is very, very subjective about it.

I was running netlabels and producing net-releases for some time by myself in the past. But now I believe that netlabel revolution has played its great role already, and it is a dead body now, to me at least. For me it’s a game without energy inside. No beauty, no challenge, no magic anymore. I believe that netlabels create more chaos and problems for artists than anything else these days. Maybe because of a strong overflow… Maybe because it’s too easy to start sharing (releasing) music for free, and too easy to lose control over the quality of the process, and too seductive to hide your weakness behind all those “underground” and “independence” walls. The level of responsibility is different here…

But of course I am generalising very much, and there are some great exceptions still, but today if I had to choose, I would prefer to look over peer-to-peer networks for new music than discover netlabel catalogues.

I can’t predict what will happen to physical media in future but I don’t think that it is so obvious that there will be only digital distribution. In any case every artist wishes his music to be released on something you can hold, see, smell and touch, and that didn’t change yet. And there are still many people who prefer to have music not just on their hard drive. I think the game has just started and no one can say how it will end. So even after starting digital distribution I still plan to have each work to be released first of all on CD’s and maybe vinyl, and selling mp3’s will be only as a small and functional addition. It keeps me awake.

10 – Perspectives for the future, what lies in the horizon for Kvitnu? Can you share some long-term goals and where would you like to see the label heading to?

I hope to present one or two new names from Ukraine in near future. I can’t really say when, but I really hope Kvitnu will have new artists soon. Also I am thinking of a big compilation of Ukrainian experimental music, sort of a representative anthology. But I can’t say when I will have enough resources to make it.

Also we do have plans about continuing concerts activities in Ukraine. Not just festivals, but also smaller events. On a more regular basis than before.

Recently I find biggest inspiration in some certain fields of dance culture. There are some artists who do great leap forward with every new work: Extrawelt / Midimiliz / the Delta and all other projects of these guys. Also I was impressed by Drumcorps – probably the only breakcore artist I like, and I like him a lot. Just a few weeks ago my friends opened for me Spor from Lifted, some tracks sound really powerfull. From old names: “Stealth” the latest album Scorn “Stealth” – Mick Harris again made something incredible.

Regarding labels, I guess that I really wait for new releases from Boshke Beats. They don’t do them very often, but they have their very own face. Their latest release, “Chronika chapter III” stayed in my player for weeks since I got it.