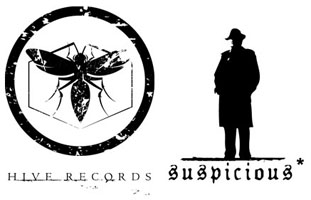 “Shrapnel Beats” is the main slogans for Hive Records a relatively young label founded in 2003 by Davyd Pittman (alias DJ: Insect) a DJ active in the Texas scene, now based in New York City. With releases in genres that go from experimental noise to ambient, through power noise, IDM, drum’n’bass and others, this is a label that can’t be pigeon-holed except perhaps for the high quality of its releases. In 2005 Hive was joined by Suspicious Records, a spin-off label for “Anxious Urban Prophecy”, with a strong focus on trip-hop, downtempo and other melancholic breakbeats. 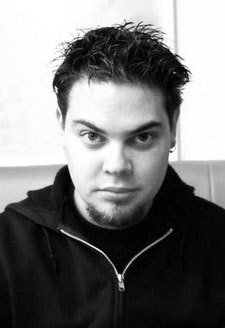 1 – How and why did you come about starting Hive Records? What about the sub-label, Suspicious Records?

Hive Records started as a way to promote the club I was running with DJ Caustic in Dallas called SWARM back in 2003. The original release (the HIV.01 compilation) was just going to be a one-off to give away to people as an incentive to check out the local industrial music scene and maybe get a few more heads in the door. The CD featured bands that had either played live at the SWARM (Tarmvred, Mimetic, etc) or bands who had otherwise been involved, either through CD release parties or similar promotional events (Daughter Darling, God Module, etc). We only anticipated selling a few copies and giving most away, but the CDs disappeared very quickly and I realized that there was far more potential in releasing music that people could take home with them than there was spinning for a small crowd in a really underground club in Texas, even if we did have some great playlists. So I started contacting bands that I really liked and things took off from there.

Suspicious really started out of a leap of faith that I struggled with for a long time. I have always been a fan of downtempo music and the “classic” trip-hop Bristol sound, but I wasn’t sure I was entrenched in that scene well enough to market it effectively. The first band on Suspicious was Leaf, who were friends of mine in Dallas for years, and whose music I’d followed and loved for a long time. I decided to give it a go, and it’s been endlessly rewarding – Suspicious has picked up a massive amount of momentum in just a couple of years, and already has a much larger fanbase than Hive does. Granted, it’s a much larger scene, but we’ve got some professionally produced videos and a US tour coming up for the Sunday Munich release, and that’s something we couldn’t have dreamed of just a year ago.

2 – When you started Hive Records, were there any labels that you could say were a reference/inspiration for your efforts?

In the beginning, I had nearly no idea what I was doing, I think we have grown as much as we have due to hard work and a feverish desire for quality as much as any knowledge of “the biz”. I owe a debt of gratitude to people like Nicolas @ Ad Noiseam, Jim and Allen @ Metropolis, and Yolk @ Artoffact for helping me out in the beginning and filling in some of the gaps in my knowledge.

3 – Almost mandatory question, how did the names for Hive and Suspicious Records come about?

Well, I’ve been spinning as DJ :insect for years, our club was called ‘the SWARM’, and my short-lived ambient/noise project was called ‘Insect Genetics’, so I guess it’s a theme that I’ve stuck with for a long time. I wanted to be an Entomologist or a Paleontologist as a kid, and Fossil Records (while a pretty good pun) sounds pretty lame. Suspicious was the product of a late night brainstorming session with a Hive collaborator, Brandon Smith of Metawerks Design. After about two hours of trying to suss out a name, that one made the short list and fit the film noir aesthetic of the music we wanted to push with the imprint.

4 – Since the inception of Hive Records, are there any events in the history of the label that you’d consider as particularly relevant, from difficulties and setbacks to successes?

I’d have to point to the signing of Saltillo and Sunday Munich as one of my personal successes. I have been a fan of Sunday Munich since the late 90s after finding their two CDs in a Florida record store, and I have been completely floored by the music that Menton Matthews writes ever since. A year after the instrumental Sunday Munich EP “Ganglion Instrumentals” failed to come out, I was rabid for new music, so I spent literally nearly two years tracking Menton down to offer to help the music see the light of day. That EP eventually became the bulk of the Saltillo album “Ganglion” we released on Suspicious, and it’s been a personal triumph to work with one of my favorite artists of all time. I would also have to say the fact that I can continue to release CDs of bands whom I love even after 4 years of personal tumult and various crippling financial setbacks is in itself a miracle. Every CD we have put out has been a success in its own right, and that’s due completely to the amazing musicians I have had the pleasure of working with.

5 – So far what would you consider as special highlights (or successful) releases and artists in the history of Hive Records?

Well, the “FUCK” compilation stands as one of our most successful releases, people still to this day write me trying to track down one of the limited edition 2CD versions. I am also very pleased with how the Broken Nightlights CD turned out – it was two years of hard work putting the CD together, and I still listen to it often and marvel at just how good all of the artists that appear on it are. It’s a wonder some of them are still unsigned.

6 – Are there any releases in particular that you would recommend as good ‘introductory material’ to Hive Records?

For Hive, I’d say the Pneumatic Detach releases are good starters – the two P.D. remix CDs kind of encompass the breadth of sounds that we try to push with the label. I don’t think you can really pin down a “Hive sound” except to say that its electronic, often dark, and definitely emotive for music lacking any accoustic instruments. We’ve put out ambient CDs, clicks’n’cuts, drum’n’bass, power noise, breakcore, electronica, sub-bass dub… there’s a lot to find if you go through the catalogue. I think Suspicious is definitely more cohesive, and any of the 3 releases on the imprint will give you an idea of the type of melancholia we try to push with that brand.

I try not to have any regrets in any aspect of my life, but there are of course always things I could have done better. My professional background is in graphics and paramedical work, neither of which entailed a lot of business training in school. The learning curve is steep if you want to stay afloat in this business, but luckily I think that the great people who have collaborated to make Hive what it is have all put in a fuckton of sweat and tears and that has kept us going where we otherwise would not have been able to.

8 – An obvious question, but what is Hive Records’s ‘relationship’ with the Internet? From promotion tool and digital sales to file sharing and piracy, how has it affected you?

You can find any Hive or Suspicious release in bootleg MP3 form on about a thousand different sites just via Google. It’s a sad state of affairs, but it’s the reality of the world we live in now, and I try to take it in stride. I’m willing to take a hit financially every time we put out a CD in order to see the music get out there, and that’s really the only way to ensure continued survival for a small indie like Hive. On the other hand, I think that things are in flux a little bit – while the technology to pirate music this easily isn’t necessarily a new thing anymore, I think people will eventually begin to collect commercial releases again, it’s just up to the artists and industry to provide them with something that just doesn’t compare to a pirated MP3 album. As far as promotion, it’s really levelled the playing field and given indie labels a chance to flourish in a market that was for so long dominated by massive labels throwing obscene amounts of money at horrible releases. By the same token, things are really saturated now, and there are a lot of indie releases coming out that probably should have stayed on the demo shelf. So it’s a mixed bag as far as quality goes.

I think CDs have a few years of life in them yet, I mean, people still collect vinyl to some extent, don’t they? Netlabels can offer some really interesting and amazing stuff (Laridae and Entity come to mind), and I think it’s a welcome evolution in the industry. There will always be collectors like me who want a physical release, so I tend to think of netlabels as adding to the musical dialogue rather than undermining traditional labels.

10 – Perspectives for the future, what lies in the horizon for Hive Records and Suspicious Records? Can you share some long-term goals and where would you like to see the label heading to?

There’s a lot on the horizon, even as we’re coming out of a bit of a lull and the 6th relocation of the label in 4 years. There are a slew of new albums coming out in ’07, as well as a full US tour in support of the Sunday Munich album “Flood” which is due out this year on Suspicious as well. We have the North American festival circuit this year with lots of Hive bands represented at C.O.M.A.4 in Montreal and the next Indoctrination fest in Chicago. So lots of good things coming – Hive is going to really start to blow up again as the spring approaches.

My personal musical taste is kinda off the wall – I listen to a lot of downtempo, hip-hop, metal, industrial… I’ve really been into MC Chris lately, he put on an amazing show here in NYC last week. He’s equally hilarious and talented. The new Halou album “Wholeness and Separation” is really good. And the last Cakebuilder 12″ on Ad Noiseam has been getting a lot of spins from me, really dark and still fun to rock out to really loud. I also can’t wait for the new DJ Hidden album – everything that guy does is good.

Support your local music scenes, and thanks to everyone who has supported what we do! Oh, and go see “Children of Men”. That movie fucking rocked.