“else.product exists for strange, unusual and dark music that doesn’t adhere to any musical boundaries. Music that is compelling and might otherwise be lost.
The music itself is amazingly varied, from the afterhours carnival feel of the Denver Gentlemen, to the minimal beauty of Tactile, to the many styles Coil has inspired. If you’re looking for the standard and familiar then this is not for you.
This is something else…”
— from the else.product website 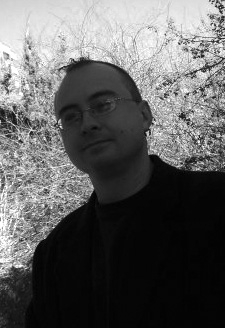 1 – How and why did you come about starting else.product?

Before the label, there was the first Coil tribute. The Coil email list had been talking for a long while about all the musicians on the list putting their Coil inspired, remixed or cover tunes together in a collection. Eventually tracks were gathered and artists voted on the title for the collection. I suggested “Loved Stolen and Deconstructed” and that stuck. The collection was released on CDR in an edition of 300 in 1999.

The following year the Coil list started talking about wanting to do it again and as things progressed we all tried to figure out who would finance the project and gather all the tracks. So I decided to step up to the plate and put my money into something unlikely to recoup expenses….and that’s where “At The Threshold Moment” came from.

2 – When you started else.product, were there any labels that you could say were a reference/inspiration for your efforts?

World Serpent was really it for me. I loved the personal interactions and the amazing artists available through them. Coil was easily the reason behind my desire to create music and then the label itself. Over the years I have known a few DIY folks doing incredible things, like Backwards Records, who has released Blackcell, Haunted Sound Laboratories, Kuxaan Sum, Page 27, In Ether and so many others.

3 – Almost mandatory question, how did the name “else.product” come about?

It was an evolution of the names I’d been using for my personal music projects. I’d started creating music under the moniker Papa Loci, but had started feeling like the name didn’t represent what I was creating. A friend then asked me what my music sounded like and I said something along the lines of “uh, I don’t know, something else.” After that I decided else was a better representation of what I was doing. When the artist designing all the artwork for At The Threshold Moment was nearing completion of his end of things, he’d emailed me to ask the label name and I figured the sounds would represent something else and else.product started.

4 – Since the inception of else.product, are there any events in the history of the label that you’d consider as particularly relevant, from difficulties and setbacks to successes?

I’ve been very lucky in that almost every release has at least broken even, which I consider success enough to continue putting more out for those who might appreciate something new and off the beaten path. There have been many difficulties over the years, but the ones that stand out the most are my divorce and therefore funding getting tight, as well as the death of John Balance, which hit me as if a parent of mine died…

As for success, each one is a success if it sees a larger audience and garners appreciation for any further output from each musician.

5 – So far what would you consider as special highlights (or successful) releases and artists in the history of else.product?

Honestly, each release has impacted my psyche. The first release actually ended up doing well and after a year recouped expenses. Middle Pillar distribution basically paid off my debt from the first else.product release and with that minor amount of success I figured I would keep following my passion and my ear.

I am especially glad that my friend Adam Stalker (Mort Douce) has gained a larger audience, as well as opportunities, to continue spreading his very dark and compelling sounds.

The ninth else.product release, “The Denver Gentlemen”, was quite a departure from where the label had been going. The entire album was complete and ready to be released. Founder of the group, Jeffrey Paul, mentioned that a local label in Boulder, CO was planning on releasing it, but apparently one of the two owners of that label split town with all the money and left the release hanging. I offered to fund it without even having heard it. JP was nice enough to burn a CD-R of it for me to listen to, only to get me excited about the album and within the month the band split up. It was very frustrating to have this amazing piece of work in my hands and not be able to share it with everyone. Well, six months later JP reorganized The Denver Gentlemen and they were back together, and I was given permission to release the self-titled album. This particular album meant so much to me because the Denver Gents were such an integral part to so many amazing bands. Sixteen Horsepower, as well as Slim Cessna’s Auto Club both stemmed from the Denver Gentlemen, and influenced Devotchka and Munly.

“The Loneliest Link in a Very Strange Chain”, the tenth release, is a collection that was originally started in the summer of 2004 and was due to be titled “Never” to celebrate those things Coil had announced, but had never seen the light of day. Contributing artists were encouraged to play out those things that might have been created or those things which had never officially happened. This of course changed in November of 2004 when John Balance fell and passed from this world. The project came to a halt, even though most of the artists had already provided their contributions. Discussions were had between all parties involved in the effort and the project was nearly scrapped, I was convinced that this needed to be released. It was not to be called “Never,” because it was to horribly accurate. This was also the first project I worked with Greg Rapp, he continues to be an influential aspect of else.product to this day.

6 – Are there any releases in particular that you would recommend as good ‘introductory material’ to the else.product label?

Actually “Splicing The Icy Expanse” was designed as a sort of introduction. It started with a sleepless night where I had six different songs stuck in my head at the same time. That night I had a sudden realization that none of those six songs had been released and I could do something about that! So, the next day I emailed the various musicians and graphic designer Greg Rapp to start on the artwork. I think the album travels the gamut of most of the music in the else.product catalog.

The only real regrets I have had with the label would be that I didn’t have a bigger budget. I really regret that the Harvest release didn’t happen, and there are quite a few Mort Douce/Adam Stalker releases that I have in my possession but never had the financing to make them happen. It has been suggested that I release an “Of Spectres and Saints” CD every year for Halloween. I love the concept, but financially it would be a bit of a stretch. But who knows what the future will bring…

8 – An obvious question, but what is else.product’s ‘relationship’ with the Internet? From promotion tool and digital sales to file sharing and piracy, how has it affected you?

The entire goal of else.product has been sharing music that needs a larger audience. I think file sharing is terrific. I have never had a problem with people sharing with friends and strangers. There are a few bands I have worked with that are not of the same mindset and I do what I can to respect that, since it was their hard work and creativity on the line. I have relied greatly on word of mouth, via the people I know on the internet, and have seen a greater audience. Although, I have also seen people abuse their presence on the internet to the point that people get sick of seeing them and view them as nothing more than media whores. I have no issue with anyone promoting however they like, but I don’t need to feel like I am the center of some three ring circus. People like the music or they don’t, I just hope they get the chance to find out for themselves.

else.product will always maintain a physical presence. I grew up with vinyl and loved all the liner notes and looking at every detail of the packaging and am still obsessed with it. Especially with knowing so many artistically geared friends it’s a way to showcase their talents as well as compliment the music. Greg Rapp had an intuition on every release he helped with. I would give him a few descriptive words and he’d create exactly that feeling I was hoping to capture. Working with the artist Jesse Peper has been a very different experience, as he has a huge body of work that is completed, yet hasn’t seen a larger audience. Much of what he has created over the years reflects my vision.

As for the online presence, www.else.product.com has finally been updated to allow direct orders through site and that’s exciting for those who can’t find some more obscure titles.

10 – Perspectives for the future, what lies in the horizon for else.product? Can you share some long-term goals and where would you like to see the label heading to?

Ideally we’d like to do well enough to continue doing a few releases a year. I’ve really been appreciating more acoustic bands locally in Denver and hope to release some of those great musicians. I recently discovered the fundraising website, Kickstarter, which (with the help of several supporters) helped me to fund and release three amazing albums last November.

I have had ties to Backwards Records in Denver and always look forward to what they are doing. In Denver there are quite a few local acts that I am really appreciating. Bad Luck City is at the top of the list and is doing something similar to Sixteen Horsepower and Nick Cave at the peak of their carriers. Jen Korte is doing some amazingly soulful tunes. Blackcell has taken the Ant-Zen sound and added another layer and stepped forward three paces from where Ant-Zen is currently. Jesse Peper has his project Icedagaz which uses multiple Nintendo DS and twists the sounds into vaguely Egyptian bug music. Also The Painted Saints are long overdue for a release, but have two amazing older CDs out. They are still doing what Denver started years ago with The Denver Gentlemen, such as accordions, cellos and tunes so heartfelt that you can’t help but be moved.

I have been so lucky to have had so many artists trust me with something so personal. I have done all I can to get their music out there and allow the artists to grow and continue doing what they do so well. www.else.product.com has finally been updated to allow direct orders through site.