Crunch Pod is an American industrial music label and online web store currently based near Sacramento, California. Crunch Pod, the label, began in 1998 and has grown from a small, limited edition only CDR label to the home to such acts as Caustic, C/A/T, Cervello Elettronico and Manufactura. In 2000, Crunch Pod began a parallel activity as a distro to help distribute a few other small and not-so-small labels. 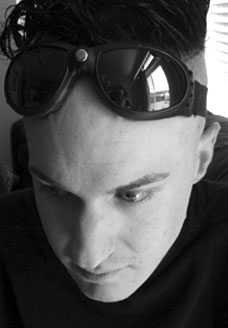 1 – How and why did you come about starting Crunch Pod?

Crunch Pod started in 1998, mainly, because at the time I wanted an outlet to get my own music released and figured starting my own label would be a great way to accomplish that and keep complete control of my work. It was amazingly simple and only required getting a free “Geocities.com” web account and filling out some paperwork at the local city offices and I was “officially” a record label. Ironically enough, I didn’t release my own music, besides a few compilation tracks, until almost 3 years after the inception of the label.

2 – When you started Crunch Pod, were there any labels that you could say were a reference/inspiration for your efforts?

The only one that stands out as a major influence was Ant-Zen, as I was listening to their artists a lot around the time I put Crunch Pod together. Also, in the early days, we worked a lot with some of the more experimental labels like Troniks so they could be counted as an inspiration as well.

3 – Almost mandatory question, how did the name “Crunch Pod” come about?

I was a radio DJ for about 10 years and I had a “gimmick” where I’d have a new on-air DJ name every few months. One night in 1997 or so I randomly pulled the name out of thin air and the rest was history. I found it pretty amusing that in 1999 or so, a Disney created cartoon had a fictional video game in the show called “Crunch Pod”, but no, I had the name first and it has nothing to do with show.

4 – Since the inception of Crunch Pod, are there any events in the history of the label that you’d consider as particularly relevant, from difficulties and setbacks to successes?

I think relocating to Seattle for a while really helped the label, mainly due to the increased exposure and for the people I met while I lived there. The key signings to the label I think at this point were getting Manufactura and picking up Caustic after Static Sky Records went under. Another key milestone for me was getting to do a US issue of Black Lung’s “The Coming Dark Age” as I’ve admired David Thrussell’s work a great deal. While not a defining moment, I think that a variety of things I released in the earlier days were definitely not up to the standards of what I’d consider for release today. But, we live and learn, sometimes the hard way, in this business.

5 – So far what would you consider as special highlights (or successful) releases and artists in the history of Crunch Pod?

As I mentioned above, getting to work with Manufactura, Black Lung and Caustic have all been highlights for me. I also think the CDs by The Operative and Endif that we released were incredibly underrated albums and serve to show the wide variety of music we’ve released over the last nine years.

6 – Are there any releases in particular that you would recommend as good ‘introductory material’ to the Crunch Pod label?

I’d list C/A/T “The Rogue Pair”, Manufactura “Presence: Into The Here And The Now”, Cervello Elettronico “Negate The Instigator”, Caustic “Booze Up & Riot” and Endif “Meta” as the best ones to get better acquainted with our sound.

I’d like to go back and be a little more restrictive on what we released. We had some albums in the past that we invested a lot of money into and have not sold as well as we’d hoped. Quite possibly, these were cases where we were not the correct label to be promoting the particular sound of that album and it didn’t connect as well with the label’s core sound. I still keep a copy of everything we’ve released in my personal collection as I believe that everything I’ve done with Crunch Pod and the result was for a reason and there is much to be learned from that.

8 – An obvious question, but what is Crunch Pod’s ‘relationship’ with the Internet? From promotion tool and digital sales to file sharing and piracy, how has it affected you?

I think the one thing we’re actually lacking on the internet is a good “official” website. I don’t have the design talents to really pull one together and I’ve been trying for over a year now to find someone who can create a site for us. That said, we’re on all of the major social networking sites (ie. MySpace, LiveJournal, Virb, VampireFreaks, etc.) and people can get a sampling of the various artists and releases we have to offer there. We also have the vast majority of our “in print” catalog up on the key digital distribution sites (ie. Amazon, iTunes, eMusic, Napster, etc.) and while we don’t see as much money as we do by selling CDs, it’s still better than having someone pirating our albums as the only way to offer them in a digital format. I’m not going to rail on about how “downloading is killing the industry” because it’s a tired complaint at this point that has been said a thousand times. We just work with and try to minimize the affects it has on sales, etc. by being a little more cautious with promos in advance of album releases and the like.

Call me “old fashioned”, but I prefer a durable physical object to an audio file any day of the week. I’m not sure as much about vinyl – I had to stop selling it in our mail order as shipping vinyl, especially outside of the U.S., became expensive and tended to arrive damaged. I think the CD is a dying media but at the moment there isn’t any one form that seems to have replaced it. I was a child when CDs were first becoming mainstream and I haven’t seen “the replacement” for that being marketed just yet, in my opinion. At this point, we still plan on releasing a physical version of everything we’re doing on CD, but you’ll also be able to get the album from all of the digital distribution points as well.

10 – Perspectives for the future, what lies in the horizon for Crunch Pod? Can you share some long-term goals and where would you like to see the label heading to?

We’re celebrating our 10th year in existence in 2008. Originally I’d planned to do a label compilation to commemorate this but found out that several of our acts already had special album plans set for 2008 – so we’re going to run with that. Ideally I’d like to get our artists better exposure outside the USA. Getting Caustic booked at Infest helped, as has having Cervello Elettronico play several dates in the UK and Europe this past summer. My main goal is to just be able to continue releasing the music I love and get it out there for others to hear.

Label-wise, I’m always impressed with what Hive Records has put out and I’m also a big fan of the Sistinas and Mechanismz labels. As for artists, lately I’ve been listening to a lot of stuff like Noisuf-X, Modulate, Soman, Prometheus Burning & Marching Dynamics.

Thanks for the interview. Oh and, DEATHKEY!