New York, 2001… A time when breakcore was starting to come together from the underground, IDM was just about finding its place and Cock Rock Disco got its start in life. Started by Jason Forrest, who at that time, was performing under the moniker of Donna Summer, Cock Rock Disco was one of the pioneering labels pushing breakcore forward, alongside the likes of Addict Records in the US, and Adaadat in the UK. Cock Rock Disco features an impressive roster of artists including Duran Duran Duran, Pisstank, Doormouse and Slepcy. 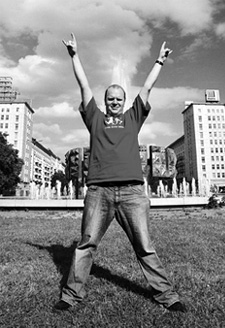 1 – How and why did you come about starting Cock Rock Disco?

I was living in NYC and meeting a ton of new musicians, etc. I thought it would be a “good idea” at the time. I had very small ambitions at first though.

2 – When you started Cock Rock Disco, were there any labels that you could say were a reference/inspiration for your efforts?

When I started, I was very inspired by Fat Cat. I loved their split series; always found the music they offered very thrilling and extremely diverse. It was also a slightly different time, IDM was still growing, and the boundaries of electronic music seemed pretty open. But at the time I was completely curious and very excited about Addict records as well. There was some breakcore around, but it was still pretty early even then. Their stuff was sort of cheaply made (ok, extremely cheaply made – white labels with some magic marker, a Xerox, etc) but they totally had me hooked, and I had envisioned for Cock Rock Disco to be somewhere between these two labels.

3 – Almost mandatory question, how did the name “Cock Rock Disco” come about?

4 – Since the inception of Cock Rock Disco, are there any events in the history of the label that you’d consider as particularly relevant, from difficulties and setbacks to successes?

One difficulty however, and I’m sure you’ll hear this from almost any label, is that distribution seems to get more and more difficult. It’s just very hard to sell anything, and CD sales really suck. It’s hard to make any head way with the actual CD product.

5 – So far what would you consider as special highlights (or successful) releases and artists in the history of Cock Rock Disco?

We started really amazingly with the debut release by Duran Duran Duran, and it’s been pretty great for both him and us ever since. The About record finds it’s audience growing steadily and the Drumcorps record is really making heads turn. I think the Terminal 11 and Slepcy records are also painfully good. So I do feel our releases have advanced the state of what is possible in electronic music- if even in a small way.

6 – Are there any releases in particular that you would recommend as good ‘introductory material’ to the Cock Rock Disco label?

Why our free compilation ( www.cockrockdisco.com/free.zip). That’s a 58 minute free compilation from 2006. Tracks by all our artists at the time and it’s been enormously popular, downloaded 78,000 times and counting!

I wish I could have convinced some distros to actually give a fuck. But this is a common problem.

8 – An obvious question, but what is Cock Rock Disco’s ‘relationship’ with the Internet? From promotion tool and digital sales to file sharing and piracy, how has it affected you?

I don’t believe that MP3s are in any way “piracy”. MP3 technology does what it was invented to do, which is reduce file size. As a musician and as a label owner I see many opportunities with MP3s and we have made a few pretty aggressive moves in this case. We were one of the very first labels to have our own MP3 store in 2004, and also have offered many, many free tracks online, including the aforementioned free comp. In January I released a free 60 minute DJ mix to pretty massive download and next week we’ll offer our first 100% free online only Cock Rock Disco album.

When you look at the numbers between how many people get our music for free vs. CD/12″ sales, you’d be foolish not to put shit online for free. After all, the idea is to get our music to people to enjoy it.

9 – Slightly related to the previous question, how do you see the concept of ‘netlabels’ and, as a label head, what is your perspective as to the future and evolution of physical media (CD’s, vinyl, etc)?

It’s obviously a pretty big question. At first I think everyone didn’t really give the proper respect to online labels. Now I think the online labels will probably be the only labels living on in the future. I mean, who buys CD’s? I don’t. Do you? Probably not. Certainly there are and will be new ways to earn some money off of making and distributing music, but at the same time, as V/Vm once told me, the people who make changes now will be rewarded in the future.

10 – Perspectives for the future, what lies in the horizon for Cock Rock Disco? Can you share some long-term goals and where would you like to see the label heading to?

I can tell you we’re gonna be doing a lot more free music at the Cock Rock Disco website, and this helps our artists tour. This year sees new releases by:

– The Assdroids – Load records insanity meets breakcore in a T-11 style. Really groundbreaking in many ways I think.
– Nero’s Day at Disneyland – an awesome new artist from San Fran, his music sounds sort of like baroque music using all rave synths.
– Food For Animals – Noise/Hip-hop that sort of sounds like a mix of Merzbow and Cannibal Ox.
– DJ Technorch – Japanese newest trancecore saviour! Dancefloor killers!

Yes! Come and join our Cock Rock Disco forum! On the whole, a great group of diverse people talking smack. Oh, and sign up for our newsletter, most of them include… free MP3’s! Haha.