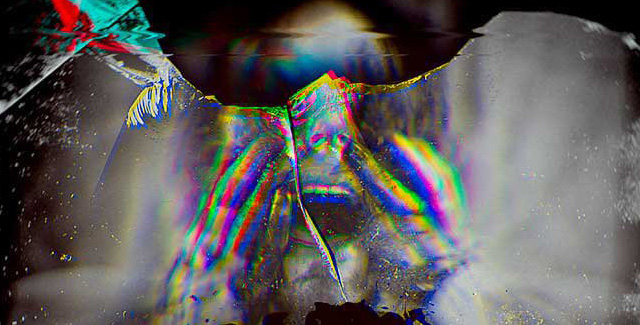 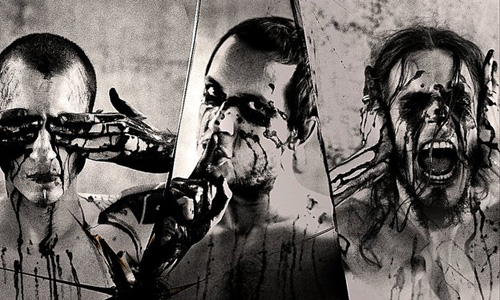 2010 was a busy and interesting year for French cyberpunk band Chrysalide and, with a new album “Don’t Be Scared, It’s About Life” coming out soon (and a tour to go with that) Syco, Arco and Amnesy won’t be slowing down anytime soon. We got the chance to talk to Syco and Arco about their music projects, Audiotrauma, life on tour, politics and just how people react to their Pink Floyd cover…

You held another excellent Noxious Arts festival back in September. How do you feel after this and what did you enjoy most about this years festival?

Syco: We can say again this year that, both humanely and artistically, the festival went very well despite a slight budget deficit. Being the organisers, we’re very keen on keeping this festival alive despite its difficult situation and the exhaustion we experience each time. We will keep on fighting for it to happen again although probably not in Paris because of logistics and convenience. We’re thinking about coming back in the eastern part of France. We’ve even mentioned the idea of coming back to the “Moulin of Pontcey” in Vesoul, France, where it all started. To be continued…

You both started Audiotrauma in 1997. How did you come to start the collective and where do you hope to see it heading in the future? What inspires you to continue with Audiotrauma?

Syco: Actually, we started Audiotrauma at the end of 2001 and officially at the beginning of 2002. It was Sonic Area which began in 1997! Originally, a collective of friends who shared a passion for electronic experiments and libertarian alternatives set it up. Throughout its 9 years of existence, Audiotrauma organized about 100 events, 25 releases, 4 Noxious Art festivals and nearly 350 gigs all over Europe – the collective and its personalities matured considerably. But, where we were 15 in 2004, we are now only 5 in 2011. Time passes and leaves its mark. We’re thinking of recruiting new members to defend this beloved entity despite the harshness of the socio-economical situation we’re in, especially in France. Next year, we’re going to celebrate the collective’s 10th anniversary and we’d be delighted to celebrate with you all!

Arco: For me, nothing’s changed since 2002, To make noise again and again. The new Chrysalide album is coming out soon, I am currently working on new material for Sonic Area and I am thinking of giving an apocalyptic follow up to F.Y.D. As long as I am healthy and can find ways to survive, I will carry on tormenting your eardrums. 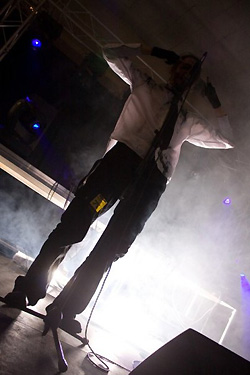 3. There is a strong political influence to some of the music from Audiotrauma. Is there a political philosophy you have at the label, or is it merely personal interest? Are you personally involved in any form of political activism?

Syco: There’s no real political dogma within Audiotrauma. We’re all very sensitive to historical, sociological and political changes in the world. It is quite obvious that one can find a libertarian political dimension in everything we do. We are united against the capitalist farce, which pretends that slaves can be free. I am one of the most radical members of the collective. I push artists towards artistic and sonic terrorism.

Arco: It’s not just about the music with Audiotrauma. We use music to express what this sad world inspires to us. We are openly against capitalism, fascism and the media. We aim at disturbing standards of conduct by confronting people with images, explicit samples, syncopated pulsations and minimal, cinematographic and infantile melodies. Our slogan “VOUS ETES LE BRUIT” (You Are The Noise) illustrates Audiotrauma’s political engagement and its ambition to unite forces and people, not only inside the collective or the scene but more globally each listener. It invites all of us to express our opinions, to collaborate, to demonstrate and to break the silence that we impose on ourselves by being unaware of our potential to induce changes while staying united and true to ourselves.

As Chrysalide, you’ve recently added Amnesy to the line up. I suppose this allows you to be more creative with your live performances but has it changed the writing process? Is Amnesy purely a live member of the band?

Syco: Amnesy joined Chrysalide originally for the Noxious Art Festival in September 2009. Initially, he was meant to participate only as a live musician but his motivation and multiple talents blew us away and it quickly became a collaborative and creative process between the three of us. Amnesy is a very gifted and motivated multidisciplinary artists, which is his main quality in our perspective. A real fusion happened and you can feel his input on Chrysalide at every level.

Arco: Artistically speaking, just as with my brother Syco evidently, I feel extremely close to Amnesy. Since he’s joined the project, we constantly exchange ideas and know-how. It is very stimulating. We spend a lot of time interacting verbally and then each of us starts to work in what we can do best. Nowadays, Chrysalide is a true entity created at the image of its three members.

Punish Yourself vs Sonic Area was one of the highlights of the Noxious Arts Festival for me. How did you come to collaborate in the first place?

Arco: Audiotrauma and Punish Yourself have known each other for a long time. We’ve met on the road on many occasions and we’ve always had a mutual respect for each other. We also share a taste for experimentations as well as a pessimistic vision of the world we live in. One morning, shortly after my album “Explore” was released in 2007, I received an email from VX (the lead singer of Punish Yourself) who wanted to compose an album with me. I immediately agreed. I was then given approximately 40 tracks of unused material. It felt orgasmic to play with all these sounds and then to offer them to the band. Then VX came to my house several times to do a heavy and meticulous post-production work. It took a lot of time but we are all delighted with this rich experience. We really wanted to surprise as well as please ourselves.

6. What made you change your mind on performing live again, as wasn’t the Phenomedia performance supposed to be a one-off?

Originally, we hadn’t planned to play these tracks live. Then we thought we should try it at least once to see if it could work. And I think that we really enjoyed ourselves on stage. I am really looking forward to going on a small tour with them. It will be a good opportunity to share our vision of mass media with even more people. 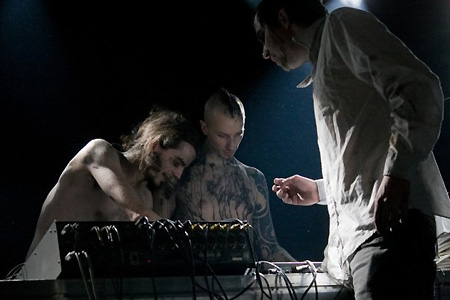 How did you come to form Republik Of Screens? This sounds much more digital hardcore than your other projects from what I have heard so far.

Syco: I formed Republik of Screens with Nasty Bug (aka Sub Produkt) at the end of 2009. For 5 years now I live in Tours and it there that we met. I had wanted to create a more minimal and primal project for several years, and yet couldn’t find the necessary time for it. When we started the writing and the recording of the new Chrysalides album with Arco, I immediately realised how frustrating it was to work and exchange from far away, or during short and intense periods of time. Nasty Bug was the answer to my deep need to try something else. After several sleepless nights and several bottles of vodka, Republik Of Screens was born and became a truly living and evolving concept-project. Our first EP should come out in March on Audiotrauma. To be more concrete, it consists of a minimal and radical teckno-indus-noise with a shouted and repetitive flow to represent a virtual politico-philosophical concept.

You have done a lot of shows in mainland Europe, and played some large festivals. In fact you’ve recently released a live Chrysalide CD-R of your 100th performance. Do you have any concert or touring stories that were memorable for whatever reason and which you’d like to share with us?

Syco: Chrysalide is definitely a living band that needs an audience. It’s mainly on the road and when we play in different scenes in Europe that we feel the most alive. This gives a meaning to all the work we do previously in the studio. Many things happen on tour and these make great stories. I especially remember all the dates we played alongside our friends Ambassador 21 whom we share that passion of playing live with. There is a real positive connection between the two bands which enables both of us to push limits a little further, gig after gig. I don’t differentiate between gigs in squats, usually more chaotic but so lively, and gigs in clubs or festivals, often more comfortable but sometimes a bit too serious. We like to play for as many people and in as many places we can.

Arco: Our tours are extremely physical and tiring. With all side-projects, I very often play several gigs within the same night. Mentally, it is hard to keep up. Between stolen gear, missed trains, broken equipment, injuries (3 stitches at the Elektroanschlag festival, burns on the right hand in London, broken teeth on the microphone in Belgium), times when you play in front of nobody, times when you play in front of 1000 people, times when you play bare-chested under -10C freezing temperatures, the times when your voice is already hoarse during soundchecks, times when you can’t find a member of the band two minutes before starting the gig, times when bastard custom officers waste two hours of our time on the road when we are very late, times when you bump into friends on motorway services (Hint, Ezekiel…), endless, passionate and exhilarating discussions with Ambassador 21 and vodka of course, it is a bit difficult to remember everything.

What plans do you have next for touring?

Syco: We keep the desire to play as much as possible! That is why we’re getting ready to go and defend the new album in front of live audiences. We don’t have any choice, it is a matter of survival for us. We need to externalize and share our anger. The current general context certainly won’t calm us down. On the contrary! We’ve joined the N-Syndicate team, who works with KMFDM, Combichrist and Tamtrum. Through them, we’re hoping to grow a little bit more.

Arco: We’re seriously thinking about touring the US, Japan or even Australia. To be continued… 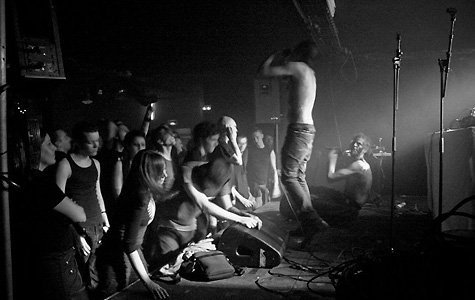 Speaking of the “100th Live 4.24.2K10” CD, You covered Pink Floyd’s ‘Another Brick In The Wall’, which I feel is a brave choice on many levels. What kind of reaction do you get to that particular song live?

Syco: We started to play this track (if we can call it a track) a few years ago to end our live shows. So far, we’ve always had very good feedback. It appeals to any crowd and even the coldest audience. Everyone knows the original song. After hundreds of requests, we accepted to record it for the “Peacemakers Inc. II” split CD released on Invasion Records. I think we’re not going to play it anymore because is has had its time, or maybe in very rare occasions.

Arco: People’s responses are always unbelievable. Sometimes, audiences become completely crazy and everything can get out of hand. It’s like a full-blown riot!

Is there anything we can be looking forward to – from new releases to live performances and so on – that you can tell us about?

The new album “Don’t be scared, it’s about life!” will be released very soon. We’re planning a big tour to promote it and we’re impatient to meeting you all!

Do you have any final comments or requests?

Syco: Don’t be afraid to switch off!

Arco: The more one sees the world dying, the more one feels alive. Do not fear what it takes to get there.