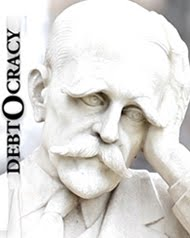 Debtocracy (Greek: Χρεοκρατία hreokratía) is a 2011 documentary film by Katerina Kitidi and Aris Hatzistefanou. The documentary mainly focuses on two points: the causes of the Greek debt crisis in 2010 and possible future solutions that could be given to the problem that are not currently being considered by the government of the country.