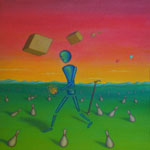 “Identities” is a meandering cacophony of edgy feedback and ambient loops, recorded in real time by Tin Moth’s Breath. Intentionally raw and untouched by additional mixing or mastering, the three extensive tracks (plus a bonus track) were inspired by the work of Joe Rygwelski, an artist friend of the project. Four of Rygwelski’s rather bland surrealist paintings comprise the album art for “Identities.” The unsophisticated forms, flattened perspectives and bright colors of the paintings directly correlate to the feedback-driven, confusing and directionless odyssey of the music they inspired.
“Identities” tends to revisit themes and sounds over and over. Partly a result of the incessant looping of synthesizer samples and field recordings alike, the repetition also functions as texture; a foundation for the sound collage style for which Tin Moth’s Breath expresses a fondness. “Identities” is in essence texture, though at times it becomes difficult to understand why the music doesn’t progress much further than this simple interpretation. Whether grating, droning, squealing, humming, crashing, repeating or just aimlessly creating dissonant noise, “Identities” (especially the first track, “Hi Dad : 2 specks of light”) sometimes tests the nerves of the listener.
The second track (“True Face : Never been to a funeral”) is the album’s longest and best; quiet ambience with softly falling rhythmic pulses in parts, full of electronic bleeps and chirps. The fourth (untitled) track, although the shortest on the disc at almost nine minutes, is interesting for similar reasons. With peaceful, flowing tones and unobtrusive samples, it stands in welcome contrast to the harsher discord that dominates the beginning of “Identities.”