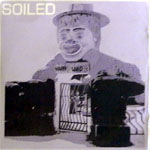 It would seem that between this four-track release and the previous “Mindnumb EP”, Soiled’s sound has been refined and gained some completeness, losing part of its “notepad jotted-down ideas” feeling.
There is still a markedly characteristic experimentalism and lo-fi punkish attitude in Soiled’s music, noticeable by the twists and turns that some of his tracks present. It’s almost as if the author indulges in giving practical answers to creative doubts about his music during the composition process, and records not the finished music piece but rather a musical construction process.
The upbeat opening track, “Fuzzdust”, and the genially-titled “Uttoxeter Holiday Incident” are the standout tracks for this EP and may be considered “finished works”. The melancholic “Uttoxeter Holiday Incident”, in addition to its name, is a very good and interesting piece of song progression and sound layering. “One line in fishponds” and the title track “happyland” have a more markedly experimental character, like noted-down ideas or logs of a musical construction, as mentioned before.
“Happyland” is supposedly the precursor to the release of a long-play album later on in 2005. I, for one, am looking forward to it.