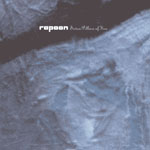 Thisco strikes again with another more artistic project. Rapoon has been going under various guises for more than twenty years, composing film scores amongst other accomplishments, which it shows very distinctly in “Seven Pillars Of Fire”.
A slow, brooding, dark, low sound builds into suspense-filled strings as one would expect in a horror film, from then on opening into a more natural ambience as strings collide off-key to produce a very eerie sound, with occasional metallics rattling away in the background. As the tempo increases into a pulsating bass and sweeping ambience, the addition of haunting voices rising and building into a cacophony of metallic rhythm and wailing ethnic voices panned from speaker to speaker gives way to nicely scored strings.
Very one-dimensional but brilliantly executed, had this been a full-length release it would have been a more negative review from me. However, this is only one track long, and at 20 minutes it seemed the perfect length of time for this style of composition. Having said that, maybe an additional ambient track would have benefited this release, as at only 20 minutes, it is not enough. A great track and well produced, with some clean and distinct sounds, great ambient although not long enough for a CD.