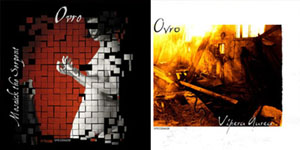 Combining two distinct EP’s (a total of twelve actual tracks on a single disc, with nicely designed inserts for each), “Mosaick the Serpent / Vipera Aurea” is the latest output from Finnish dark ambient artist Ovro. Saturated with enigmatic and surreal soundscapes, the disc will likely appeal most to fans of the industrial wasteland aesthetic – it has the ability to simultaneously lull the senses and disturb the mind. Individual tracks blend together, creating a cumbersome entity of sound that rumbles, creaks and breathes over more than forty-five minutes of moody expression, from bathymetric “Mosaick the Serpent” to cacophonous “Vipera Aurea.”
The disembodied voices and foreboding, sometimes malicious, lyrics often appear unsophisticated or puerile while, at the same moment, they nourish a discomforting atmosphere. “Second Momentum” asserts ‘I am my own demon’, while “Statement of Existence” threatens ‘she’s gonna fuck you up’. In a few cases, the looping vocal samples are obnoxious to the point of becoming unlistenable. “Scarlet Calls” is a prime example, though an exception when compared with the ominous and tactile collages that reverberate through the remainder of “Vipera Aurea.” Despite its preferably fewer vocals, the latter half of the release lacks the absolute depth of bass so appealing in “Mosaick the Serpent.”
Ovro relies heavily on samples and location recordings, tweaked and manipulated in turn to create disconcerting voices or sounds and an overbearing feeling of pressure and tension. It is as if the artist is exploring the immense and hostile boundary between two lithospheric plates, exhilarating in the unimaginable, crushing forces that exist there. “Mosaick the Serpent / Vipera Aurea” aspires to be the stuff of experimental nightmares, though it should be equated to the stuff one plays to actualize an intentional bad trip. Perhaps for some, differentiation between the two is a moot point.