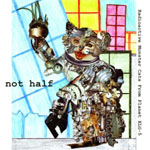 Okay, the first thing I noticed was that this was originally released in 2007 on the now extinct Sublight. That label was reputable for releasing high quality music form the likes of Enduser to Venetian Snares, so this initially put this release in good stead and it was with this enthusiasm that I approached this release.
I am one for packaging and good quality artwork and unfortunately this has neither. Frankly, it’s appalling. I will give this area of attention as much as they have, and that’s nearly zero. Wonderful.
So what about the music? Let me re-phrase the word “music” to ‘ummm, I don’t know, random noises or something’. That’s a little cruel as there are moments on this album where it does step into the ‘song’ territory and it’s these rare moments they should have clung onto with dear life, where this unfortunately is just 12 pointless tracks that fall apart for no discernable reason. Lots of glitch, lots of screaming whining electronics, bells and whistles and whatever else they found in the kitchen sink, wrapped up with rather rough and flat sounding drum patterns make up the majority of this release. I get the feeling ‘Not Half’ really tried to be clever here and doing something ‘whacky’ or ‘zany’, but they just come across a little pretentious. I like these tracks as much as I like those two words, which is basically not at all.
A pointless C-division album that will get lost in a scene where there is such high quality control amongst its upper echelons.