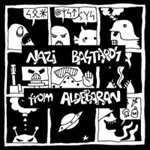 Camp, over-the-top fascism and B-grade films collide jarringly on the techno/electro/industrial crossover that is “Invasion,” a selection of seven tracks originally recorded in the latter half of the 1990s by Nazi Bastards From Aldebaran. This group represents the cream of late-90s Russian EBM, typifying the genre with catchy electro-inspired basslines and heavily laden with horror/sci-fi movie samples.
With a band name like this, and a track listing featuring such gems as “Swastika Man” or “UFO Attacks Paris Nightclub,” you know in advance that there isn’t much to take too seriously on this collection. In fact, it is this tongue-in-cheek attitude (mirrored in the badly-drawn CD cover, featuring black-and-white blobs sporting SS helmets and babbling incomprehensibly) that makes “Invasion” worthwhile. The mixing is amateurish and very careful EQ tweaking is required to avoid distortion at higher volumes, but the actual music is fairly impressive stuff. Subtle shifts in melody and rhythm make the listening process more interesting – an absolute necessity, as no tracks contain any vocals except for the aforementioned sampling that includes such oddities as wartime propaganda speeches and ‘Ordo Anno Mundi’ ritual chants. The mood developed is akin to cinematic soundtracks, building and releasing tension with great regularity – a fairly difficult thing to accomplish in under four minutes, the average track length.
Comparatively speaking, this recording is very similar to dark electro releases in the same vein (for example, Velvet Acid Christ’s “Calling Ov the Dead”) – almost trancey in the rhythmic section, heavily laden with trademark dark and mysterious samples, and all linked together with grumbling atmospheric pad work. In other words, it’s old, it’s analog, it’s not very well produced, and it’s unlikely to make a lasting impression on anyone but older fans of the genre.