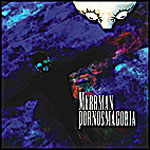 Cold Graey consistently release some of the most interesting music being produced in the eastern hemisphere and “Pornosmagoria” is no exception. Combining elements of apocalyptic horror melodrama with heavily sampled hardcore pornography may not be the obvious process to follow when composing a record; Myrrman, however, blends these skillfully, without any of the associated sleaze and infamy both visual styles enjoy, on this, his latest release. The smutty element is undeniably present throughout the record, but only on “Pronosmag” and “Son of the Sun” is it really in-your-face, unlike the deep, dank unnerving tension the horror aspect of the album continuously provides.
Technically, there is nothing wrong with this album. It’s beautifully mixed, it presents the listener with a vast and unexpected array of sounds, it’s packed brimful with ambience (even if that associated mood is murderous in intent) and provides a wonderful backing track for whatever activity you happen to be involved in at the time – sawing people in half, getting more than your money’s worth from underage prostitutes, stealing candy from babies, that sort of thing. Musically, the closest comparison I could find for Myrrman would be the grey area between where Frontline Assembly leaves off and Will begins: it carries the same sense of epic, building achievement, of climbing over the backs of your vanquished foes to victory over society, authority figures and acceptable behaviour. Classifying the album is, however, an exercise in futility: it’s not dance music, conventional electronica, EBM, industrial, experimental or dark ambient. It isn’t even a sum of these, but rather a deconstructed, distorted shadow of these clambering from the darkest recesses of the subconscious, mirroring some aspects of them, but entirely obliterating any recognizable features thereof almost immediately.
It’s a malicious, unpleasant record, likely to scare away most listeners – unless you happen to like the foot-cramping vertigo that comes with an unwilling paradigm shift. For me, personally, it was wonderful, original mood music to accompany my lengthy commutes to and from work, inspiring all sorts of antisocial mental meandering…