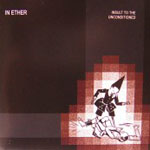 This old-ish CD has just been sent to me after I encountered band member Patrick Urn’s off-the-wall solo project Syphilis Sauna. This album isn’t much like his; it’s more like moody electronics with some eminent influences clearly apparent. It starts off with a rant from the P-Orridge school of ominous ambiguity, followed by a manga-style slice of oriental futurism, and then a rather good impersonation of Jhon Balance. The fourth track is lo-fi in the style of early Skinny Puppy, and the fifth features Aleister Crowley chanting in Enochian. So we know what we’re dealing with here.
Don’t misunderstand me, it’s rather nice to hear new music in a vein that I’m rather partial to, but it’s also good to hear them lay aside the obvious frames of reference and develop their own sound. They’re fond of crawling, sinister beats, samples of dialogue and sound effects, processed vocals, mashed-up noise and a good variety of digital and analogue-style instrumentation. Towards the end it goes disastrously goth-pop for one track, but otherwise it’s pretty solid stuff.
Sad to say, the major turn-off for me is the production quality. It sounds noisy and glitchy in an unintentional way, shabby rather than retro. Perhaps they use only really ancient kit, but the overall effect is to make this sound more like an early 80’s demo than a new release. You can get away with noisy equipment if you really overplay it (cf. Add N To (X)), and they hit that mark once or twice, but it doesn’t suit the subtler style of the other tracks. Many of them would benefit from being cleanly rewritten in Reaktor or something, and then it could score a 7 at least.