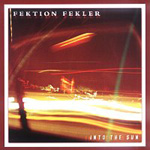 At first listen, Fektion Fekler’s “Into the Sun” sounded a bit dated to me. A sound reminiscent of the style the vast majority of artists have distanced themselves from in the past five years. While most of us used to live, eat, and breathe harsh vocal distortion on melodic synth routines, the progression of electronic music’s evolution has made bands that create this sort of composition scarce. Fektion Fekler picks up the slack in this area and has released a double CD full of both caustic vocal assaults laid to rhythmic, punishing synthetics and a testament to their creativity – strangely beautiful acoustic works along the lines of the “easy listening” genre.
The first CD is definitely classic Fektion Fekler with a little more progressive edge to the music. Distorted, grating vocals aplenty, accompanying very well-sculpted electronic arrangements. Every now and then, the first CD will give you a taste of what’s to come, a hint at the direction the group is going to take with the second CD. But for the most part, listeners will take great pleasure in soaking up the very well produced and brilliantly assembled angst-ridden sound that Fektion Fekler has been creating since their debut album, “Kling Klang Bedlam.” Avid fans of Fektion Fekler’s classic work, please take note that their course is changing.
To be honest, I was a little confused as to if I had received the correct material to review when the second CD made its way into my changer. It seems Fektion Fekler has come into a new passion in life, one for the construction of laid-back folk and synthpop’ish stylings. The music on the second CD reminds one of In the Nursery or maybe something off the Projekt label. It’s a rather startling turn for the band as they’ve never really given any indication of moving away from the sound they were known for. But with all initial reactions aside, the music is actually quite good. Different, to be sure, but still a very clean, well-constructed sound that one would expect from a talented group like Fektion Fekler… except for the whole different genre thing. It took several listenings and several proddings from the higher up at Connexion Bizarre for me to finally accept that the second CD is actually pleasing to my ears and several additional tours of my changer granted it a permanent residence. I just can’t get over how different the music is, and how much I really do enjoy listening to it.
With as much talent and dedication (not to mention bravery, fans & reviewers can be jerks!) it takes to change the direction your band is moving in, Fektion Fekler deserves special recognition for the efforts they’ve made on “Into the Sun.” Lacking the ammunition for a twenty-one-gun salute, I’ll have to settle for giving their new album a five out of five habanero peppers. This is an excellent album and I would highly recommend it to those who consider their tastes open-minded.