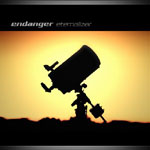 “Eternalizer” is the second release by the German duo Endanger. It is a very well produced electro-pop album, fruit of the efforts of talented musicians and one can guess that a lot of care went into its composition and production.
Musically, it is all one would expect from a good synth/electro-pop album: extremely catchy beats and melodies, definitely danceable and having an overall uplifting effect, even when song subjects are of a potentially depressive nature.
The vocal aspect is also worthy of note as singer Rouven Walterowicz’s vocals are impeccable, being responsible for a great deal of the moods of the songs and not just a complement to the music.
The lyrics, in English and German, are not very clichéed as could easily happen in an album that, like “Eternalizer”, is rather romantic in nature, dealing, for the most part, with issues such as relationships, love and the hardships and joys that love may bring.