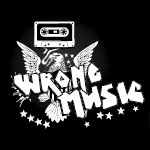 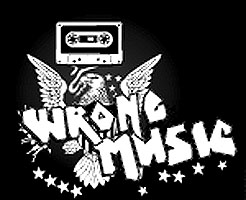 Wrong Music is a label that most certainly lives up to its name… They release some terribly wrong music, ranging from insane mashups featuring Rolf Harris and Ren and Stimpy, unbelievably noisy tracks using gameboy sounds courtesy of DJ Scotch Egg and stuff that borders on the indescribable! So this was a job for the professionals… Queue the founding fathers of Wrong Music, Ben Hudson (a.k.a. Ebola) and Henry Collins (a.k.a. Shitmat) agreeing to this interview for us. So with no further ado, let us introduce you to a record label that actually specialises in playing records at entirely the wrong speed!

1 – How and why did you come about starting Wrong Music?

Ben – I was living in Brighton, and randomly met Shige (DJ Scotch Egg) and Matt (Roger Species). They were thinking about putting on an improvised noise, breakcore gig on and asked me if I wanted to play. I ended up helping to organize the show, which we thought was unlikely to make much of an impression, but to our surprise loads of people showed up. So, thinking we were onto a good thing, we carried it on. There were some great nights in Brighton going on at that time: Sabbath, Spirit of Gravity, Slightly Off Kilter… all showcasing good weird stuff, but I think we managed to find that happy medium between idiot and genius, that people seem to relate to, or at least find mildly amusing. Hardcore rave meets cabaret or something like that.

2 – When you started Wrong Music, were there any labels that you could say were a reference/inspiration for your efforts?

Henry – The labels that inspired me most 3 or 4 years ago were V/vm, Fatcat & Planet Mu, I always imagined wrong sitting somewhere in between these labels

3 – Almost mandatory question, how did the name “Wrong Music” come about?

Ben – Our friend Simon came up with the name. He was in Shige’s old band (Noony Banoony), and played the very first gig it just stuck. It’s the ultimate disclaimer really haha. If the soundsystem blows up, ah well its Wrong Music, someone is eating the microphone and playing Des O’Connor records at the wrong speed, well it’s Wrong Music isn’t it?

4 – Since the inception of Wrong Music, are there any events in the history of the label that you’d consider as particularly relevant, from difficulties and setbacks to successes?

Ben – Being asked to play at the Glade Festival 2 years in a row (thanks Ned and Littlebig) and getting an hour to piss about on Radio One really helped us out a lot. I think they helped to consolidate our existence. No set backs really, other than the ever-present financial difficulties. Our own fault for not releasing house music I guess.

5 – So far what would you consider as special highlights (or successful) releases and artists in the history of Wrong Music?

Henry – hmmm.. The Shitmat one sold really well, but as the highlights I’d say the Scotch Chicken 7″, Twocsinak, Monopolka… they are my favourite ones! They’re exactly what I like music wise… attitude, originality, playfulness and a sense of chaos.

6 – Are there any releases in particular that you would recommend as good ‘introductory material’ to the Wrong Music label?

Henry – Both the compilation CDs, “Etc…” and “Whatever”, they contain a good cross section of artists that make music we like, and will most probably release more of in the future.

Henry – Hmmmm regrets eh!… No not really. The only thing I regret doing is not sending in my Princes Trust application back before I started the label.

8 – An obvious question, but what is Wrong Music’s ‘relationship’ with the Internet? From promotion tool and digital sales to file sharing and piracy, how has it affected you?

Ben – Yeah the internets very useful for getting our music out to people worldwide, and it’s perfect for finding new and exciting acts to book/sign. But despite the net being a useful tool to monitor our wrongdoings, I think we are best known for our Wrong Music nights in Brighton and general live gigs really. That is where the really wrong shit happens.

Ben – Netlabels are great for the same reason I mentioned before, that you can get music out to people everywhere. We are pretty precious of our hardcopy releases though. I don’t think vinyl will ever disappear. People still like to have real, tangible copies of things, so we try and make an effort with artwork etc.

10 – Perspectives for the future, what lies in the horizon for Wrong Music? Can you share some long-term goals and where would you like to see the label heading to?

Ben – We are going bankrupt. haha no not really, we never had any money. Hopefully, we are going to keep on finding fresh and exciting new advocates of wrong music, and get their music out to as many people as possible. Personally I’d like to see us take over the world, or at least EMI or something. I think they are going bust soon.

Ben – There’s loads! I’m really into Baseck at the moment. he rocks. but unfortunately doesn’t seem to have released much. there are some great mixes floating about on the internet though. I recommend any label that isn’t jumping on scene based music and churning out tons of what seems to be the same record. Shout outs to Ipecac, Planet-Mu, Fathme, Mego, Here’s My Card Records, Wood Crew, Proboscus, Bedroom Research…. All knocking out amazing stuff!