Simultatenously a music webzine and record label, the Montréal-based [walnut + locust] record label is one of those very small “do it yourself” record labels that so easily (and undeservedly) slips under the radar. Despite small, their output includes some rather interesting material from lesser-known talent and a few well-known acts from the field of experimental electronic music. 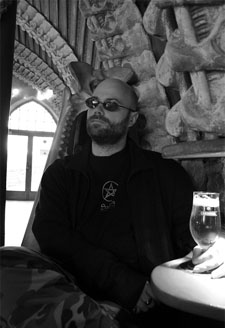 1 – How and why did you come about starting [walnut + locust]?

[walnut + locust] was a web magazine in its inception. I started it in 1999, using the experience I got while working on fanzines in the late 80’s/early 90’s.

Our first release was a compilation CD called “red: a [walnut + locust] compilation”. I contacted bands who had previously been featured on the web magazine and asked them to compose a song reflecting their vision of “red”. This was the first time some of these artists would be featured on a factory-pressed CD. We also got the support of established artists, like Letum, HIV+ etc.

It was intended as a one-shot event, to celebrate our 5th year online. However, we got more opportunities later on, so we keept going…

2 – When you started [walnut + locust], were there any labels that you could say were a reference/inspiration for your efforts?

Not really, but I would say I have always liked the esthetics and strong visual unity of labels like Cold Meat Industry, Dorobo and Constellation Records.

3 – Almost mandatory question, how did the name “[walnut + locust]” come about?

Walnut & Locust is the intersection of the two main streets on the block where I lived in Philadelphia. I started the web magazine when I moved back to France.

4 – Since the inception of [walnut + locust], are there any events in the history of the label that you’d consider as particularly relevant, from difficulties and setbacks to successes?

One story that sticks in my mind is how I met Eric from Pine Tree State Mind Control. It was at the front row of a Venitian Snares concert in Montreal, back in 2002. I told this tall and loud guy to keep quiet during the show and, at the end, he gave me one of his albums as an apology. Pine Tree State Mind Control have been steady supporters and collaborators of [walnut + locust] and have been featured on 3 of our releases (“red”, “CrO2” and “Philippe F Remixes”) so far.

Everything is “do it yourself”. I work at my own rhythm. It is not always easy to combine a day job with running a label, but I think that’s part of the game: everybody knows there are 27 hours in a day… The only real difficulties have been finding distribution and organisational problems with the manufacturers.

5 – So far what would you consider as special highlight (or successful) releases and artists in the history of [walnut + locust]?

If we consider successful in terms of sales, the Merzbow “Live In Geneva” album is undoubtedly our best seller, but to me the “CrO2” compilation is the greatest achievement. It features great and well established artists like Aube, Molasses, Ulan Bator and Chris Carter (I’m a huge Throbbing Gristle fan, so working with him was an incredible thrill.)

6 – Are there any releases in particular that you would recommend as good ‘introductory material’ to the [walnut + locust] label?

The compilation “CrO2: A Tribute To Analog” seems like a good starting point. It covers our whole area so far: from industrial to experimental to ambient to post-rock.

My favorite release at the moment is Maggot Breeder’s “Myiasis”. It’s probably one of the best dark ambient albums I have heard in years. I am really glad that we were able to release Reuel’s first album, knowing that he has been working on this project for almost 20 years.

No regrets. I would like to have more time to work on distribution so our CDs would be more widely available.

8 – An obvious question, but what is [walnut + locust]’s ‘relationship’ with the Internet? From promotion tool and digital sales to file sharing and piracy, how has it affected you?

Internet has always been very close to us: as I said before, we started as a web magazine. For us, internet is a great tool for promotion and sales. We use forums and message boards to inform of our releases and our featured artists.

We have released 2 “virtual” albums: the compilation “Dent De Lyon”, which gives a taste of the underground music scene in Lyon, France, and “Philippe F Remixes” which features 17 remixes of the .cut featuring Gibet track “Philippe F” as done by artists from around the globe.

I have also released some of my own musical projects through netlabels. It’s a great medium, but as far as I am concerned, I am still very partial to “real” albums as an object.

10 – Perspectives for the future, what lies in the horizon for [walnut + locust]? Can you share some long-term goals and where would you like to see the label heading to?

More releases, of course. We are in contact with several artists so expect great releases in the future. I would love to release one album on vinyl one day.

The last CDs I bought were Jesu “Conqueror”, Controlled Bleeding “Body Samples”, Larsen “Rever”, and Milemarker “Ominosity”. I recommend that people keep their ears and minds open to new and different musical experiences at all times!

Thank you for your interest and support. A special message to the readers: support your local scene and musicians as well as the independent record stores without whom none of this would be possible.