Sistinas’ roster is an eclectic group of electronic artists, from Rhythmic Noise to Synthpop and everything in between, the label being home to such diverse acts as W.A.S.T.E., Phantom West, Modulate, Broken Fabiola, Alter Der Ruine and To Mega Therion. 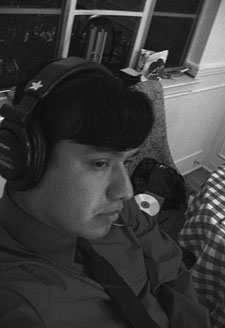 1 – How and why did you come about starting Sistinas?

I have been involved in the industrial music scene for several years now in a variety of ways. I have promoted club nights, designed everything from flyers to CD covers for VNV Nation and Combichrist, all under the name of Verdilak. Last year I realized that I had made enough connections through my design work to finally create my own music label. With the encouragement and support from friends Rev John at Das Bunker, Tim Clark at Anode Studios, and Shane at Mechanismz, I decided to give it a try.

2 – When you started Sistinas, were there any labels that you could say were a reference/inspiration for your efforts?

The two major inspirations were AntZen and CrunchPod. I have a lot of respect for what S. Alt has done with AntZen. I believe he raised the bar pretty high when it comes to production and design quality. Ben at CrunchPod has also been a big influence, especially in the business aspect of the label.

3 – Almost mandatory question, how did the name “Sistinas” come about?

Believe it or not, I have been using the name Sistinas since 1998. It started off as an online goth/industrial webzine with a pretty big following back when the web was still a new way to promote your work. The zine received several awards and it became an online music resource. I ended the zine in 2003 in order to focus on my design work.

As for the actual meaning of the word, a sestina is a poem that consists of six stanzas, each with six lines, followed by one three-line stanza. I liked the structure of the poem, but I also liked the sound of the word. It always reminded me of the Sistine Chapel, which is why I have changed the spelling from sestina to sistina for the label. Whatever the meaning, I have been using the word for almost ten years in some form or another and when it came time to name my label, I decided to resuscitate Sistinas.

4 – Since the inception of Sistinas, are there any events in the history of the label that you’d consider as particularly relevant, from difficulties and setbacks to successes?

The label is still in a very early phase, but I believe I have learned a great deal with the few releases we’ve had so far. The W.A.S.T.E. and Cacophony tour is one of the label’s biggest successes, but organizing it gave me some pretty big headaches. I had no idea of what I was doing. Thankfully, Rev John helped a lot. I made many mistakes and learned a great deal about booking a tour.

5 – So far what would you consider as special highlights (or successful) releases and artists in the history of Sistinas?

I believe that all of our releases have had some level of success. I’m especially proud of the way people have received Phantom West. Tim’s music is a little hard to market because he touches so many different genres and sounds that it’s hard to categorize his music, but people seem to be enjoying the refreshing sounds he’s coming out with.

I’m also very happy with the fact that we signed Modulate. The album will be out this March, but the buzz in the scene is already out of control about the release. The title track for the EP is already a pretty big club hit and the anticipation for the release is growing every day.

6 – Are there any releases in particular that you would recommend as good ‘introductory material’ to the Sistinas label?

“Materia Oscura”, our very first compilation is a really good example of what the overall direction of the label is. It contains tracks that go from straight up noise to relaxing downtempo. W.A.S.T.E.’s album, “This is what we seek”, is also a great example of the type of power electronics that make up the core of Sistinas.

The ride has been pretty pleasant and the label has gotten a lot of support. I think we’re doing things right. I honestly can’t think of anything I would do differently if I had the chance.

8 – An obvious question, but what is Sistinas’s ‘relationship’ with the Internet? From promotion tool and digital sales to file sharing and piracy, how has it affected you?

As I stated before, Sistinas started off as an online webzine, so you can pretty much say that Sistinas was born online. A huge percentage of our marketing and promotions happens online; from sites like My Space and Live Journal, to the Side-Line forum, Sistinas depends on the internet to get the word out about upcoming releases. I’ve always been a big supporter of online marketing and proof of it’s effectiveness can be seen by the amount of international orders we receive from countries as far as Israel and Japan.

As far as the file sharing and its affect on our releases, I’m one of the few that are not concerned with it. I honestly believe that as long as people are listening to the music and enjoying it enough to let other people listen to it, then it can’t be that bad. I’m sure that illegal downloads probably take away from our sales, but I believe the percentage is too small to really make much of a difference. There are plenty of real music collectors out there that still believe in having the actual physical copy of the release. Sistinas caters to these people by creating limited editions of its releases in order to give something extra as a way of thanking them for their support.

I actually downloaded a free album from a netlabel right before I started this interview. I believe that netlabels are a great way for artists with music that caters to very small audiences to get their music out there. I personally think CDs will still be around for a while longer, but music distribution will be changing drastically in the next few years. Digital distribution will certainly take over and, being a graphic designer, I find it a bit sad to see music packaging go away; I also, however, see it as a challenge to figure out new and innovative ways to add visuals to the music being distributed digitally.

10 – Perspectives for the future, what lies in the horizon for Sistinas? Can you share some long-term goals and where would you like to see the label heading to?

We have many plans for this year. As I mentioned before, the Modulate release is going to be pretty big for us, but I’m also very excited about the smaller releases coming up. After Modulate, we are releasing a compilation with Crunch Pod entitled “Materia Fria”, which will feature new tracks from artists on both labels. W.A.S.T.E. is also working on a new album that will be out by the end of the year. There is an EP that will be released in the summer while we wait for their next full length. We’ve also signed some really good new bands, Alter Der Ruine, To Mega Therion and Marching Dynamics. They will all be releasing albums this year, which will keep me very busy.

As for the direction of the label, my original plan was to turn it into a hub for all types of electronic music. I’m still working towards that goal and even though we’ve made a good dent on the power noise scene, I really want to explore other sounds like downtempo, synthpop and IDM.

My music collection is made up of an eclectic array of music. I think it’s funny that people think that all I ever listen to is industrial, but as much as I love that genre, I spend a lot more time listening to downtempo and even lounge music. I’m a huge fan of artists like Thievery Corporation and The Gotan Project. I pretty much buy anything that the Eighteenth Street Lounge label puts out. I’m also a big Babyland fan and I always recommend them to people.

For scene related stuff, I recently picked up Endif’s album again and have been listening to it a lot. I’ve also been enjoying the new Combichrist and Skinny Puppy a lot.

I really wish to thank everyone that has supported Sistinas thus far: the DJs, club promoters, online publications and podcasters. I firmly believe that no matter how much time, money and effort I put into promoting the label, the real promotion comes from you guys.