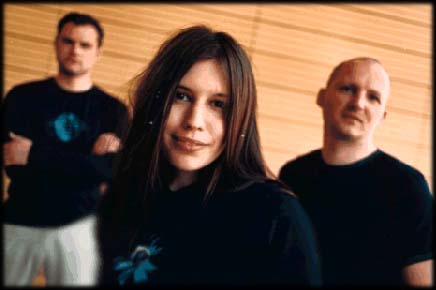 They are celebrating ten years of existence and are supporting Apoptygma Berzerk in The World in Harmony Tour. You can see them live on stage somewhere in Europe. They are NoComment, an electronic German band with ecological interests. Curiously the first NoComment’s release, from 1992, is called “Harmony”. They started with Harmony and are now touring in Harmony. NSI-Online spoke with Franzi, Tom and René, via e-mail, before the begining of the tour.

1) Nocomment has already ten years of existence, can you tell us some of Nocomment’s story during this ten years? How did start the band and who are the members?

Tom: We started the band back in 1989, after some tape-releases in 1992 our first CD “Harmony” was released. 1995 after the release of the 2nd album “Screen” we split up because we wanted to go different musical ways in future. René and me continued with nocomment together with Franziska, who joined the band in 1996. Together we have released the albums “bondage”, “painkiller” and “underwater tales”, followed now by the “best of”. 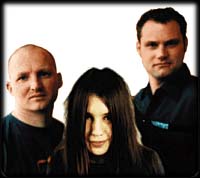 2) You are going to release a “best of” CD, do you think that’s a good way to show to the public the work you have been done during your first decade of existence?

René: Yes, it definitely is, because lot of the old stuff is no more available and we also have a lot of new and unreleased stuff included on the CD. We have a lot of fan reactions that asked for that, and we thought after more than ten years of nocomment it would be a good idea to release a “best of”.

Franzi: Since we also are going to present ourselves on a huge audience during the tour with APB it’s also a good overview for the people who do not know nocomment until now.

Tom: We want to release a best of that’s not only linked to the past, like done with other best of CD’s, but that’s linked to the future, too. So we thought it would be a good idea to present a full decade of nocomment and to offer the buyer of the CD access for free downloads until 2004. So the name of the CD was the result of that idea. And since the “best of” is a double-CD that contains more than 30 tracks, it’s a real additional feature for every buyer.

René: We think that in times where more audio CD’s are copied than bought you have to offer the audience more than just the CD and the music on it. This CD is a real world-premiere, nobody has done that before for a best of CD We also believe that you can’t split the usage of music in computer-based or not, like the major companies try to do with the copy-protection. That’s all linked together and it’s quite normal that people try to get snippets or mp3’s from a band they like or they want to know more about. We don’t think that copy protection is the right way, we think the right way is to offer the audience a better product and more value for their money and to link our music with our internet appearance.

4) Can you reveal a little more about what we can expect from this best of?

Franzi: The “best of” contains two CD’s, one with material from 1996 on, one with older material. There are more than ten unreleased songs on it, a lot of remixes and rarities and of course all songs you’d expect us to release on a “best of”. And certainly our new single “It’s not too late” is included on it. Every quarter until 2004 a free download-track will be offered for the CD-buyers, this will be mostly new and unreleased tracks or give the possibility to prelisten to new releases of nocomment.

5) Part of the money you’ll receive with the EP “It’s not too late” is going to be donated to Chernobyl children and you produce music without nuclear power. That means that you have ecological interests. Can you tell us a little more about it?

Franzi: We had the idea to do something special connected with the release of the best of. Since we are all against nuclear power, it was quite natural to support the organisation “Children from Chernobyl”. The organisation is run by Hiltrud Schröder who is a very reliable and well-known person in Germany, so we are sure that all money is donated to the right organisation and that it will be forwarded to the children. For every sold CD we will donate 1 Euro to her organisation.

René: Certainly bigger record companies or bands could sell more CD’s than we can, but this can’t be the reason to do nothing! There is a lot of help needed for the people still suffering from the results of the nuclear accident in Chernobyl.

Tom: We switched our studio and office to nuclear-free power with the help of Greenpeace Energy. It’s so easy to do that and we thought this is another good way to communicate that this is so easy to do. We are all interested in ecological subjects, we are not radical or want to go back to nature, but we think that it’s not so hard to care a little bit about the world and that every contribution is important.

6) Do you think that many other bands worry about ecological problems?

Tom: Well, there are some of them of course, but most of them are like the normal people. In Germany more than 50% of the people are against nuclear power, but only 1 or 2 % get their power from a nuclear-free power-supplier…so when it comes to the point that you have to pay for something or to change your behaviour people often forget their ecological interests.

7) Nocomment are going to support Apoptygma Berzerk in the World in Harmony European tour, with Echo Image too. How did Nocomment join Apoptygma in the tour?

Tom: We heard that they were searching for a support band and so we contacted their management. Since they already heard from nocomment and liked our music it was a quite easy and fast decision.

Franzi: We really look forward to the tour, we’ve never been on such a huge tour before. It’s also a great way to present nocomment to a wider audience. And since we like the music of both bands we play with, it will be great fun.

8) What do you think of the fact that many of electro bands that use to do EBM or other kind of “hard” electronic are now doing synth-pop or techno? Do you think that’s a natural evolution or maybe an easier way to be famous?

René: Haha, that seems to be a natural evolution…:-)…but we have already survived it long ago….
Well in fact most EBM bands had very simple structures, since you can’t write the same song over and over again, after the third album everybody adds more melodies, has better equipment, gets older….and so the music is more melodic and softer. Certainly there are some harder bands that managed to be as hard as they were before and they are still interesting and creative. But most of them changed their style or just copied themselves which I find very boring. I don’t think that it’s so much about being famous when the style changes, everybody who starts with that music is in for the music at first place, otherwise the people could directly join the next casted boygroup or a hip-hop or techno combo. 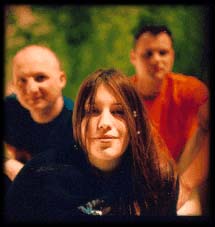 9) Are you planing a tour on your own soon? What bands will you choose to support you in a tour?

Franzi: this is too early to say, we first have to survive the coming tour…:-)…it depends on where we reach more audience interested in nocomment. There would certainly be a lot of other bands we would like to tour with, in both ways, if we would be headliner or support band.

10) After the release of the best of and Apoptygma’s World in Harmony tour, what are the plans for Nocomment?

Tom: We’ll directly start working on new material during the tour and record it afterwards. We plan the release of a new album in 2003, but of course it’s very early to talk about that.

— presented in collaboration with NSI-Online. Interview by Lenoel Silva. (April 2002)