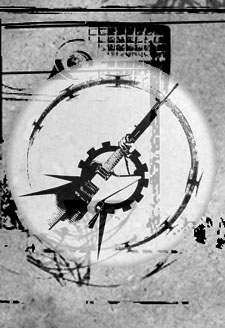 1 – How and why did you come about starting Les Forces Alliées?

Our band, Muckrackers (industrial harsh punk/Blast Furnace Valley/Lorraine/France) originally wanted to organise its discography, its distribution, its trades, etc via through the simple principle of ‘Do It Yourself’ (DIY). Until now, we’ve never considered asking an existing label to release our material, we’ve always made it our own way, with our own finances, our own graphics, our own network… Then we decided to expand our activities to bands and artists we know and like and who share our way of thinking and our views, such as Beinhaus, Shizuka, Lith and many others. So far, the discography of Les Forces Alliées is very modest: only a few dozen CD-Rs , four CDs and two vinyls.

2 – When you started Les Forces Alliées, were there any labels that you could say were a reference/inspiration for your efforts?

We like unconventional, adventurous and free labels. Those that can put forward bands without imposing a trademark, those who can create an atmosphere and a link between their releases, without standardising the sound or recreating the same objects endlessly. Examples? Labels like Permis De Construire and its little brother Permis De Construire Deutschland who released music by Nox and Pore, two artists very different from one another, a label like Earache with a more metal approach which managed to impose Fudge Tunnel and Carcass as two abrasive references without formatting them. The opposite of labels line Ant-Zen who constantly repeats the same formula for years without bringing anything new…

3 – Almost mandatory question, how did the name “Les Forces Alliées” come about?

The term globally refers to the coalition of armed forces which came together during World War Two to face Germany and which gathered the United Kingdom and France around the United States of America. Globally, I think that the musical world (even amateurs) is very individualistic, conservative and that people don’t help each other. Because we work the opposite way and because we want to bring together good wills, we found it quite meaningful to once again refer to “Les Forces Alliees”.

4 – Since the inception of Les Forces Alliées, are there any events in the history of the label that you’d consider as particularly relevant, from difficulties and setbacks to successes?

So far we have travelled only a modest distance but we’re proud of each release, of each encounter, whether we intervene in production or in co-production. We’re really proud to have helped with the release of Dee n’Dee’s first album, an industrial/metal band, as well as Sonic Area’s second album release, even if with hindsight we wouldn’t do it again.

5 – So far what would you consider as special highlights (or successful) releases and artists in the history of Les Forces Alliées?

For now, our discography is still too small for us to consider that we brought anything noteworthy. We really hope that the [KLTN] or [Koalition] releases, which showcases ‘versus’ between artists we like, will last long enough to enable those who took part in it to get a larger response than the 50 CD-Rs that we produce each time.

6 – Are there any releases in particular that you would recommend as good ‘introductory material’ to the Les Forces Alliées’ label?

The first Muckrackers album, “Bis zum Tod”, is probably the label’s corner stone. It is abrasive, as much electronic as it is metal, and industrial in the original and deep sense of the word: born from industry.

We don’t have any regrets yet; the label is too young for that.

8 – An obvious question, but what is Les Forces Alliées’ relationship’ with the Internet? From promotion tool and digital sales to file sharing and piracy, how has it affected you?

We are deliberately outside the major distribution circuits and make a point of not selling our CDs more than 10 € or 5 € for CD-R editions (including shipping in both cases). We consider that, by allowing the greatest number possible of people access to our music, we will get our messages across to others. We also understand that for the younger ones, it can be quite difficult to buy our records and that peer-to-peer can solve the problem. We have nothing against it: we simply try to explain to free MP3 lovers that we only have the produce of our album sales to allow us to pay for future releases and if we can’t sell records anymore, then we’re bound to die. But peer-to-peer doesn’t affect us that much: those who listen to us understand that they support us by buying our records; they somehow make a militant act. Buying our records also means supporting us to fight for our land’s survival, the Lorraine.

We are attached to physical media and we believe in making them, we’ll carry on for as long as we can. When we run out of our productions, we make them available for free as downloads on our website (www.forces-alliees.org). We don’t want to become a ‘netlabel’. Our websites can provide more content, videos, photos, flyers, etc. but it stops there. I don’t listen to music on my computer.

10 – Perspectives for the future, what lies in the horizon for Les Forces Alliées? Can you share some long-term goals and where would you like to see the label heading to?

We have projects but no particular precise objective. We hope we can carry on helping bands that we like and release many more Muckrackers albums. We’re quite busy ;)

We’re really into Beinhaus; we find them one of the most interesting bands at the moment, as much live as on record, same goes with Jude or Dee n’Dee. We are looking forward to listening to the future releases by Lith or Shizuka, which we believe to be among the most creative and nonconformist French electronic projects nowadays.

Thanks for your interest and support! You can find more info, including our complete discography on our site www.forces-alliees.org!