Iris have gone through a few permutations throughout their existence band-wise, but since 2003’s “Awakening” the line-up solidified to original member Reagan Jones and Andrew Sega. The music has also evolved in many ways but, at its core, Iris has been a highly emotive synthpop project, with strong hooks and an ability to experiment with their sound where many bands of their popularity and size often refuse.
Now separated by a few thousand miles, with Jones remaining in Texas and Sega in Chicago, they put their heads together to answer some questions regarding their history, influences, new material, and attitudes on running one’s own label. Enjoy. 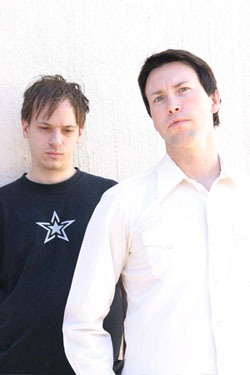 1 – Reagan, give us the story of the beginnings Iris (briefly) – where everyone met, how it all came together, what the early influences on you were.

Reagan: I was a college student at Stephen F. Austin state university here in Texas and it kinda happened overnight. I was hearing my downstairs neighbor Marc Schultz playing the Bizarre Love Triangle riff on a keyboard so I ran downstairs to introduce myself. I had no previous thoughts of joining a band. I guess that’s the strangest part of all, the consequence of spontaneity. Marc was from Houston and he had been part of their awesome club scene where the best of electronic underground was really mainstream. Houston was it. One day later we were buying mics and working on material. We met Matt Morris not long after in this electronic music class. We all took it to elevate our GPAs, since you could take it as many times as you wanted. So together we formed a cover band to earn the income to buy equipment and finish our own tracks. It’s amazing to think back on how driven we were without really having any aim. We just were seeing if we could conjure the same style and feel of the bands we all shared an interest in. Cause & Effect and Seven Red Seven were particular influences, and also Xymox, Depeche Mode, Cetu Javu, Red Flag, T42, Anything Box, and all of that.

2 – What made it go from Forgiving Iris to Iris, and what was the evolution of the music until Andrew took over the reins?

Reagan: Matt Morris liked Iris over the longer version and we just decided it would be the right time to change it since we were releasing some tracks for the first time. Maybe we’ll do that again? The evolution process was close to what it is now; I’d write songs as best I could and Matt and Marc would work on getting them into a more polished format.

3 – Andrew, how did you eventually come into the fold and bring Iris over to Diffusion? Was it weird taking over the music from a band that came so hard out of the gates with their debut CD? Was there any backlash from fans?

Andrew: So, I used to work in Austin with a guy named Joel Willard, who was the original singer of a band called CTRL. They had just played a total disaster of a festival in Houston with Iris, APB, and a whole host of other bands, and he had met Reagan and Matt. A week or two later, he got lunch with Matt and I tagged along – we seemed to click and I dropped him an Alpha Conspiracy CD. He then mentioned that Reagan was looking for someone new to work with, production-wise, and that I should get in touch with him. And so, I did, and we started working on some test tracks, the first of which would later become “Unknown”. It was hard “taking over” the music to some extent, because I knew the style would change somewhat, and that hardcore Disconnect fans might not appreciate it. However, we didn’t really see a huge backlash develop. Also, I suggested that we try self-releasing Awakening on my small label, just to be more in control of the process and promotion. Matt was fine with all of this, he still did some occasional shows with us at the time, and was starting to focus more on his wife and children.

4 – How did the current live show develop? It went from a four-piece including a drummer to the current three-piece.

Andrew: The first show we did, after I joined, was in 2002 in Atlanta (at the Masquerade). At that point, it was me and Matt on keys, and Blitz Carthey on drums. As the music continued to evolve, we decided that it would be better to change things up a bit, and so we started thinking about other ideas. The first big EU tour we did (with De/Vision) was just the 2 of us on stage, mostly due to financial reasons. I personally dislike 2-man shows, and we had started adding guitars to the records, so I got another friend of mine, Brian Pearson (Low Technicians), to play guitars on a few tours after that. Then in 2007, I moved to Chicago, so I recruited Ned Kirby (Stromkern) to handle both bass guitar and some keyboard duties. The Iris live lineup is pretty fluid, I wouldn’t be surprised if we started using a drummer at some point…

Andrew: As I’m sure you’re aware, running your own label really isn’t that hard if you can wrap your head around the details. You need a bit of money, organizational skills (for the finances), and the ability to avoid making bad decisions :) The good thing about it is that you know exactly what the finances are at all times, and you own your own masters and publishing. This second part has been pretty important to us, because we have seen a fair bit of income from TV/advertising/etc.

6 – Currently Andrew and Ned Kirby of Stromkern are trading live keys for each other’s respective bands. Since you’re exposed so much to the other artist’s techniques and styles, do you think it’s creeping into the music you’re putting together for Iris? Will you be covering “Stand Up” anytime soon?

Andrew: I don’t think so, although maybe at some point I’ll convince RJ to do a hip-hop track ;) Ned has a very particular style, and don’t think the two bands particularly overlap, except in a general “rock” sense. For Stromkern, I add some keyboard textures, and for Iris, he adds live bass which really fills out the sound.

7 – What are some of your favorite places to play, favorite bands to share a stage with, and favorite songs to play live. On the last part, why?

Andrew: We had a great time touring with both De/Vision and Mesh, they are both very nice, very professional. In fact I can’t really think of a band offhand which we’ve had a bad experience with – typically we tend to play with our friends (or friends or friends) which keeps the drama at bay. I enjoy playing in Europe, it’s a very different vibe – strange at first, but you grow to like it. People are more reserved, but then afterwards will come up to you and tell you how much they loved the set. Also the catering there is usually amazing. As for favorite songs, these days I like the ones where I can rock out on the guitar a bit – “New Invaders” particularly. It’s hard with our sort of music because we can’t do the stage theatrics that many harder bands can (*ahem* Caustic… *ahem*) so it’s somewhat more difficult to keep the audience engaged.

8 – Name some of your current influences and some bands you’ve been enjoying.

Andrew: I’m influenced by the 90’s. That’s when I really got into electronic music. Warp Records, Underworld, u-Ziq, Orbital, Fluke, Prodigy, etc were my formative influences. Then I turned into an indie rock kid and started listening to early Death Cab records, revisiting my early love of Rush and Genesis, checking out glitch-pop such as Frou Frou, etc, etc. I think as a musician you really have to have a wide variety of tastes, or else you will unconsciously get into a rut. If anything I probably gravitate to things with great melodies/harmonies, and interesting/syncopated beats.

9 – How is the new album shaping up and when can people expect it? Are there plans on touring on it?

Reagan: It’s a cool album to work on because it’s kind of no holds barred. I don’t think we have any interest in predicting how anyone will react to it, or how it will fit into any scene. We’re just throwing ourselves into it and that’s it, so the result is more electronic, more roots based. I like retro more now than even before it seems, I make zero apologies for that. Expect to hear more of that “sound” if you will. Maybe a tinge more industrial, and overall it’s more brooding than our last releases. It’s our darkest record I guess, and I don’t think anyone expects that from us but it’s just gone that way.

10 – Storytime– give us a few crazy road stories, preferably about Frank Spinath, a blow-up doll, and several watermelons with holes drilled in them. If not that, something else. What’s the weirdest situation you’ve gotten into on the road?

Andrew: Ok, Stefan Herwig once thought it would be a great idea to steal 2 pounds of wet fruit balls from the backstage catering and bring them with us on an overnight drive to DC. Around 2 AM he managed to spill them all on the floor and they were rolling around the floor of the van, so everyone (drunk) started yelling and the next thing we know he’s throwing them all out the windows at passing cars. We’ve also had some weird times in Eastern Europe… playing a restaurant in western Poland for a dude named “Big Boss”, getting drunk and playing 2 sets in a crazy forest villa a couple hours outside of Moscow, etc…

11 – Finally, will the Andrew Sega/Ned Kirby hip-hop side project ever see the light of day?

Andrew: Maybe! Dr. Kirby is has been in Vietnam doing research work, but perhaps when he gets back we’ll find the inspiration to finish up some of these bizarre tracks which have been lingering on my hard drive…