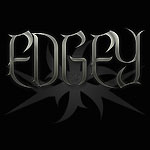 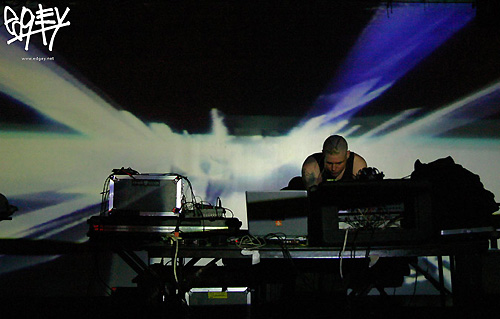 Can you give some background for the name Edgey?

Coffee. Lots of coffee. I’d say it would closer fit to being ‘on edge’ than say ‘cutting edge’. Kind of that tense, nervous feeling you get when you get amped up a little too much. The name has nothing to do with being on the ‘cutting edge’ as some have thought in the past… I still use hardware/software from 20 years ago, I don’t keep up on the latest underground DSP packs, and I’m not out to intentionally break new ground simply to break new ground.

Can you name some past and current influences be it music, books, games…?

Even though I work in the vein of drum n bass and breakcore, my roots are more in the post-industrial scene. I think that comes through in the music. Godflesh and Scorn are big influences. Along with the typical host of industrial pioneers.

Speaking of backgrounds, do you feel that living in New York has provided you with opportunities?

It used to. New York is not what it used to be. There used to be somewhere to go and something to do almost constantly, “the scene” has all but died in New York. NYC is a Disney tourist trap now. Years ago it was different, and there were many more opportunities, more clubs, more promotors, and more fans of the music. I rarely even perform in NY unless it’s for a close friend.

How did the internet help you achieve notoriety? Do you as a musician and netlabel manager have any promotion advice to give?

Definitely, the internet is/was a great thing. I was able to reach out to people that I’d never have the opportunity to work for or work with. I met some great people and really took advantage of the promotional opportunities to be found there. With the good comes the bad, the ease of dissemination of the music to get it to the masses has the ugly side of piracy. I think it should be the artists discretion to distribute their music for free. The MP3 is a double edged sword. It was never easier to get your music out there, but it was also never easier for someone to take it…

With Edgey’s history spanning over ten years and a significant discography (two full-lengths as edgey, 1 as SJK, 2 splits and the 2 2-track 12″ and quite a few compilation appearances), could you give some insight into your creative process? How, over all these years, do you manage to keep your ideas fresh? Would you say that there is something tying all your work together?

I write when I feel like writing, and if I’m not in the mood, I don’t force it. I’d rather keep it honest than put out some convoluted piece of meaningless crap that people can see through. So I might work hard for several months and release a handful of things, and then quiet down a few months with seemingly no activity.

Besides Edgey, you are involved in various side-projects like the more chilled/idm Stephen James Knight and Deep Fried Clams to name a few. Can you tell us a bit more about your side projects and what do you feel makes them different and unique?

I started the SJK project during a strange time in my life, and wanted to express something quite different than the raw noise I was putting out with Edgey. I’ve always sort of thought, if I’m angry and I write angry music, it’s a release of that anger, and once the music is out, I pass it on, and the anger is gone… as I realized that the music can compound on those feelings, amping them up rather than releasing them, it only seemed appropriate to take a different direction and work on something new. I had always incorporating bits of pleasantries in my music, and through it was time to separate the two – one harsh grindy aggressive project, and one light and airy pleasant project. The duality fits my personality well (sorry if that sounds cliché).

Would you like to talk about your studio gear & live show gear? Do you have any favourite pieces of gear?

My studio has gone from piles of electronics, keyboards and hardware towards the more minimal approach with software dominating the scene. Live shows used to consist of a truckload of gear and several people to me and my laptop. I don’t dance around or act like a fool on stage. I perform my music, hope to not fuck it up, and try to create an appropriate atmosphere. Shows and events have become more about the social gathering than the music it seems, the music is the common point for the fans, and I think its up the artists to create that atmosphere. That’s my job, to give people a reason to get together, and provide them an accommodating atmosphere that fits the theme. If someone wants to stand up front fist bump and bang there head, or dance like a lunatic completely spaz out – or just stand in the back and enjoy, it’s all good. As for favorite pieces of gear, I recently picked up a small DM5 drum kit to bang out my frustrations on.

Having performed live as Edgey in high-profile underground festivals like Maschinenfest, Forms of Hands, C.O.M.A. and Kinetik Festival as well as numerous shows through the years can you share some thoughts about performing live? What can one expect from one of your live performances in comparison to recorded material?

Some artists go absolutely insane on stage, the dance, they yell, and they put on a great show. I suppose I’m a little different in that regard, I’ve gotten generally one of two comments regarding my stage presence, either boring or intense. Some ask me if I’m cleaning a virus off the laptop, while others comment on my 1000 yard stare and focus. I may nod my head if I’m really getting into it though, heh. Also, you usually can’t see it, but I tap my foot at 16th notes. 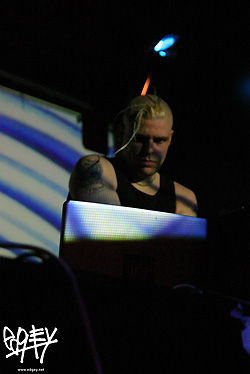 Still on the subject of performing live, are there any stories you’d like to share? You know, the kind of crazy stuff that inevitably happens from time to time when playing concerts…

I’m not going there. Thankfully I quit drinking before youtube was around. But I’m sure if you ask around there’s plenty of stories to be heard…

Would you like to recommend any artists or projects from DarkStep.org? Outside of DarkStep.org, has anything caught your attention lately?

All of them, there are some seriously amazing artists there. We’re working on a new compilation which should be available sometime in September 2010. I don’t actively go out in search of new music, if I stumble across it that’s great, but my general concept is that the more outside influence I hear, the more it will incorporate into my own music, so I kind of limit myself to what I listen to.

Do you still think about kermit when you hear current value?

Unfortunately yes, you can all thank Fexomat for that one!

Finally, what is the final thoughts you want to leave the readers with?

Hmm.. Open soapbox eh? There not enough time or pages. I’ll keep it simple, I have a new album due out shortly, working on the next Darkstep release, and a few other nice surprises coming by the end of this year.