“Inception: Fall 2001
Artist Roster: Alpha Conspiracy, CTRL, Iris, Low Technicians
Releases: 11
Amount of money spent: Approximately $40,000+ USD
Amount of money made: Luckily, more than that.
Amount of little plastic discs produced: Confidential, but it’s a five-digit number
Why we do this: Self-inflicted pain (both physical and monetary) is the best kind”
– adapted from the Diffusion Records website 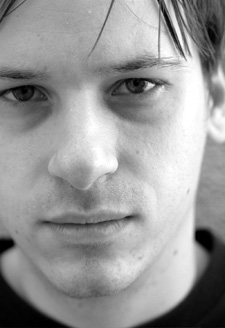 1 – How and why did you come about starting Diffusion Records?

It was originally started in 2001 as a vanity label for my old IDM project (The Alpha Conspiracy). But about six months later, I was talking to my friend Brad MacAllister from CTRL, and it turns out they were looking for a label to assist with the release of their new record “Lose The Image”. There’s a lot of mechanical things involved with releasing a record, from getting the artwork into the right templates, mastering the discs, getting product to the distributors, handling taxes, etc… and joining forces eased the workload quite a bit.

2 – When you started Diffusion Records, were there any labels that you could say were a reference/inspiration for your efforts?

Not really, although there are many labels who I think have an interesting aesthetic such as Warp, Merck, Nettwerk, etc. Mostly it was a learning process to try to figure out exactly what was involved in getting something from concept to actual finished CD in the consumer’s hands.

3 – Almost mandatory question, how did the name “Diffusion Records” come about?

It was one of the names on a long list I had of potential label names. I spent a number of hours googling only to find out that almost all of my potential choices were taken. (There are an amazing number of small labels out there!). “Diffusion” was available, so I quickly snapped up the domain and that’s was it…

4 – Since the inception of Diffusion Records, are there any events in the history of the label that you’d consider as particularly relevant, from difficulties and setbacks to successes?

The biggest success, I think, is that we are still (slightly) profitable. Sales are shifting more and more to digital, but as long as we avoid getting into debt, I’m happy. The larget setback (if you could call it that) was when we released the Kilowatts and Vanek “Rawq” disc and got into licensing talks with a rather shady European label (Holophon) which later collapsed. We spent a lot of money on that release, but they totally failed to assist in the promotion — and so it was much less successful than it could have been.

5 – So far what would you consider as special highlights (or successful) releases and artists in the history of Diffusion Records?

It would absolutely have to be the Iris “Awakening” disc, which very successful. Even after 3 years, it continues to sell at a steady pace. This was also the first disc that we licensed to European labels, and it got released in 3 versions! (Germany, Poland, and Russia). Also, a special success was getting an Alpha Conspiracy track onto an episode of “Pimp My Ride” :> But mainly, Iris has now become by far the driving force that pushes the label. Since I’m also a band member, I’m personally very happy that we were able to take the label destiny into our own hands.

6 – Are there any releases in particular that you would recommend as good ‘introductory material’ to Diffusion Records?

Everything! Well, It depends on your personal tastes. CTRL is our EBM/industrial project, Alpha Conspiracy and Kilowatts represent the IDM side, and there is always Iris if you’re into melancholy, electronic rock music.

It’s hard to say. I think we’ve mostly done things right. I wish I would have had an extra $10,000 to put into promotion, perhaps, but then again that might have ruined our biggest success to date which was our profitability. Of course, we always want to sell more records, but it’s unclear sometimes what the best path is to do that without taking too many risks. So, overall I don’t have many complaints.

8 – An obvious question, but what is Diffusion Records’s ‘relationship’ with the Internet? From promotion tool and digital sales to file sharing and piracy, how has it affected you?

On the other hand, I’m sure piracy affects us. The real problem is that the effects of piracy are almost impossible to quantify. How many people, exactly, are stealing your records? How many of them wouldn’t have bought a CD otherwise? This issue polarizes a lot of people, and so they put their own spin on the numbers to fit their particular position.

In the end, our digital sales continue to steadily increase, to the point there they are a significant percentage of total sales numbers. I personally don’t think many digital stores sell good-quality formats – for example, iTunes is one of the worst offenders with their 128kbps DRM-protected AAC files. However, it does give you the convenience of impulse-buying a song at 3 in the morning! So, we will continue to wholeheartedly support digital while also trying to innovate on the physical front. The general question of whether people will continue to want to pay for music at all – this is out of our hands, we’ll see what the future holds.

There are many good netlabels out there (like Kahvi – http://www.kahvi.org). There are also lots of terrible ones. One of the issues these days is the sheer amount of music out there to be listened to. There are more bands than one could ever hope to explore. This levels the playing field (which is good), but also makes it much more difficult to promote (which is bad). Thus, finding ways to get your music heard by the limited number of ears in the world is a constant challenge. I think this points to the rise of filters such as MP3 blogs, Pandora, Last.fm, and other sites where high-quality music can rise above the clutter.

I like physical media, but the CD format irritates me. 44.1khz 16-bit music isn’t exactly “great” quality, and the small size of the packaging limits the art possibilites. Vinyl is also an issue, because the format literally degrades as you play it over and over again. I would much prefer to find some new way to combine a) interesting artwork and packaging with b) audiophile-quality sound. On the sound front, I’m investigating things like 5.1 mixes, high-resolution audio (24-bit), maybe DVD-R formats, anything to make the sound as good as humanly possible. This also indirectly makes the disc more difficult to duplicate, and creates a wider separation between the quality of the physical media and the digital media that you purchase from places like iTunes.

10 – Perspectives for the future, what lies in the horizon for Diffusion Records? Can you share some long-term goals and where would you like to see the label heading to?

We’ll be doing a full-length Iris remix disc, with accompanying documentary DVD. Also likely is another full-length from CTRL, and also perhaps some surprise new bands. The long-term future is hard to predict. The most interesting thing on the horizon will be the close association of Diffusion Records with the gaming space, and we’ll make some big announcements on that in the fall. This will effectively make Diffusion Records the audio part of a larger interactive entertainment entity. More on that soon!

Just to thank everyone who continues to support electronic music. When you buy releases from us, almost every penny goes right back to the band, who uses it to make more music. So, thanks for the support!