“Dars records – is an independent expanding Russian label dedicated to the new intelligent music (post-IDM and new intelligent electronica, glitch, abstract, ambient, electroacoustic music) and other “pushing boundaries” styles.
We are not limited by any style, the most important thing for us is novelty and conceptuality of electronic music.”
– from the Dars Records site 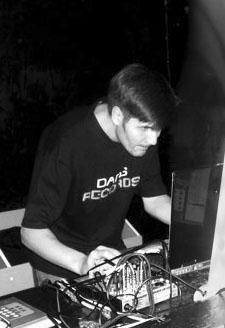 1 – How and why did you come about starting Dars records?

I started work on the Dars Records label in 2003, because I really wanted to publish this kind of music and music I loved by Russian musicians though I had not thought of it as a business. I myself created music at the time, in such styles of electronic music as IDM and ambient so this was a very personal project for me.

2 – When you started Dars records, were there any labels that you could say were a reference/inspiration for your efforts?

I admired labels like Warp releases, Merck, Morr music, Skam and Sonig but, in Russia, their releases were very difficult to find. Now everything has changed.

Among the pioneers of Russian IDM I can refer distinguished artists such as Solar X, Novel 23, Fizzarum, Ambidextrous, EU (literally Christmas Toys), Lazyfish, KLUtCh, Alexandroid and some others.

3 – Almost mandatory question, how did the name “Dars records” come about?

I no longer remember how the name Dars records came about, I liked it and left it at that. I think it sounds rather neutral, so as not to be outright associated with any one style of music in particular. However, some Russian musicians initially confused the words ‘Dars’ and ‘Dark’ (for Russian eyes, they are somewhat similar) and tried to send something dark as their demo recordings.

4 – Since the inception of Dars records, are there any events in the history of the label that you’d consider as particularly relevant, from difficulties and setbacks to successes?

Our compilations feature the participation of many prominent Russian musicians – like Fizzarum, EU, Volga, Lazyfish, Nightech, Clapan and Stud (side-project of Gultskra Artikler) – so, sometimes, there were organizational difficulties with this, which required special attention from me.

5 – Are there any releases in particular that you would recommend as good ‘introductory material’ to the Dars records label?

For the first taste of Dars Records, I can certainly recommend the CD compilations. We have a catalogue of three and I advise to start with “Music of Deneb.2099” and then move on to the albums.

All our three compilations have different concepts and 2 minute samples can be listened on the CDBaby.com webstore (http://cdbaby.com/all/darsrecords).

“Slavosonic”, the most recent of them, focuses on the penetration of Slavic culture and music, Slavic folk music, in modern experimental and electronic music. The final result is very interesting.

6 – Looking back, do you have any regrets with the label? If you could go back and change something, what would it be?

I would not change anything even though there have been very sad moments when I stopped wanting to work on the label.

7 – An obvious question, but what is Dars records’s ‘relationship’ with the Internet? From promotion tool and digital sales to file sharing and piracy, how has it affected you?

With Internet Dars Records is in “friendly terms” since its inception; ee sell CDs mainly through Internet orders. We use it as a promotion tool and digital sales, although the number of digital sales are not so strong as many people think about it.

I have also been working on a friend web site linked to Dars Records, TheSound.ru (in Russian), a music magazine, which publishes articles, reviews, interviews and announcement of experimental music (in Russian). Recently a new section was added (www.thesound.ru/store/), which deals on musical instruments (drum machines, sound modules, synthesizers) and which may be very useful for English-speaking users. When searching or viewing information on a musical instrument, selected content dealing with the same topic will be automatically generated from resources such as Youtube (video), Flickr (foto), reviews (Google blogs search). An automatic intelligent generator-site for musical instruments.

8 – Slightly related to the previous question, how do you see the concept of ‘netlabels’ and, as a labelhead, what is your perspective as to the future and evolution of physical media (CDs, vinyl, etc)?

It is a concept that is gaining momentum. Internet labels are a mass movement and are becoming more popular as another way of using this channel that is the Internet.

There are some recent examples in releases by Radiohead and Trent Reznor’s projects. It is a way for musicians in more commercial styles of music to create a name for themselves and then make money on live concerts.

In a different direction, Dars records established its own free netlabel ‘sublabel’ “Pulsations For You” (http://pulsations-for-you.ru). At this time there are 9 releases of various styles: IDM, ambient, dark ambient, jazz / electronica, and others.

9 – Perspectives for the future, what lies in the horizon for Dars records? Can you share some long-term goals and where would you like to see the label heading to?

I do not place any long-term goals for myself, because a lot of creativity depends on the occasion. Many independent labels quickly make a name for themselves by taking the the easiest way to fame, issuing already known musical projects. The scheme really works, but I earn money by other means though I really felt the sales decline CD and CD-R releases. Music is available in other ways and some artists sell their recordings of concerts immediately recorded on USB flash drive in a FLAC or WAV format. Who knows what will be tomorrow?

For Dars records the nearest plans under editions – an album of the guru of the program Reaktor, the ‘super-musician’ RachMiel (Rick Scott) (www.rachmiel.org) – something that can be described in terms of style as glitch, glitch-IDM, dark IDM – and an album of Russian guitarist Sergey Bystrov – free guitar player, similar to Jack Rose, James Blackshaw, Steffen Basho-Junghans, and Robbie Basho.

For the Pulsations For You netlabel, the nearest plans involve a new MP3 release by the Russian project Indu Mezu.

10 – What other labels/artists would you recommend at the moment and why?

I listen to a lot of music and very different styles. From Digitalis and the Foxglove labels: Pocahaunted / Robedoor, Antique brothers (psychedelic guitars), Valerio Cosi (saxophone, drone, experimental). Also, I try not to miss releases American Beta-Lactam Ring records, with artists such as Volcano the Bear, Andrew Liles, Nurse With Wound and more.

Russian projects, I recommend Instant Movie Combinations “Shipyard” (from the Coldgraey label) and Nightech “Deviation” (released by the Lagunamuch community).