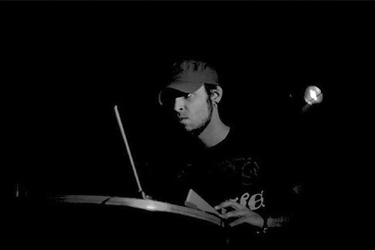 Zak Roberts is the man behind Cdatakill, a music project started in the mid-1990s and now most notably on the German label Ad Noiseam, and has toured extensively whether on his own or with other artists such as Larvae and Antigen Shift. Cdatakill’s most recent release is the critically-acclaimed Valentine, which shows a clear maturation of Zak’s writing skills as well as a departure towards more ambitious musical endeavors.

1 – Firstly we’d like to congratulate you on the astounding success of your latest release Valentine, which has received rave reviews in many countries and publications.
What was the major inspiration behind the album, and what key element of its conception demonstrates the time elapsed since your last release The Cursed Species?

Thank you very much. When I went into writing Valentine I didn’t really have any sort of thematic concept I wanted or anything. As with any of my albums I really just tried to create a sonic representation of what’s going on in my mind. I just try to visualize the split seconds between how your instincts experience events, and how your brain actually interprets them. During the time I recorded The Cursed Species I was pissed off a lot, and life was pretty unpredictable and hectic, which is probably why that record is messy, chaotic, and fast. Life was a lot mellower in comparison when I wrote Valentine, but I still had some tension I wanted to express. But yeah, I just write about my bullshit and try not to over-think it. Despite any similarities Cdatakill might have to other “industrial” bands or whatever you call them these days, I certainly don’t write about vampires, futuristic machines, or any of that uber-dramatic gothy shit. Like they say, it’s best to write about what you know.

For Valentine I wanted a slower, heavier sound. I was definitely aiming for the wall of sound aesthetic. I didn’t want that really scattered, cut-up sound a lot of people trying to be Venetian Snares are doing these days. I love dub and wanted to put together what I’d consider ‘experimental dub’ for the album, and that’s essentially what Valentine is: my fucked-up version of what I like about dub and down-tempo.

2 – Your music is distinctive and unique in that it combines conflicting sounds and undertones, for example, the beautiful and the violent. What inspires these brash pairings, and ultimately the evolvement of your sound?

I really like textured sounds, the ones that would seem to make your speakers move strangely if turned up loud enough. I find that type of sound is much easier to create when you have a very diverse range of tones running at the same time, and if you use pieces that are hard for your mind to imagine together on its own, you can stumble upon sounds that are either quite enjoyable or very alarming. My goal with my tracks is to piece together the most expressive of those pairings, and fit them to the mood of my song. It’s really just the most basic way to make the sound of the story the most conflicted and dynamic.

3 – I understand you are a huge fan of hip-hop. How does that influence your music?

I love breaks, especially instrumental stuff. These days I’ve been blasting J Dilla and Madlib like it’s going out of style. What I like about hip-hop, especially old-school, was that it did so much with so little. It was just a beat off a record and two guys rappin’, so that break had to be interesting to keep the rhythm moving. Hip-hop was the first music that introduced ‘drums as ear-candy’ to me, so I think its influence seeps into my music at least a bit. I do think most hip-hop lacks any sonic experimentation or any sense of innovation anymore though. I’d love to see some hi-fi, 3-D, 5.1 super-mixed hip-hop in the future.

4 – Regardless of genre, time and history, is there any artist you would particularly like to work with, and why?

Probably either Billie Holiday or Jimi Hendrix. Billie’s voice is just haunting – you hear it and it stuns you – and Hendrix, I’d love to see what he would do with today’s technology. Goddamn.

5 – An obvious question, where does the name Cdatakill originate from? What is its correlation to your project?

The name is just a moniker; it doesn’t really mean anything but I’ve had it for a while, so I might as well keep it. Besides, I think it can be pretty cheesy for producers to release under a million different names. What’s the point? The original name was ‘Cassandra Datakill’, because there was this really hot punker/goth chick that lived in my neighborhood when I was a kid who gave me Datakill by The Cassandra Complex on tape. Looking back that band was not the greatest or anything, but it was the first time I had any music that was distinctly mine, and not my parents, and definitely not what all the douche-bags at school listened to, so it was pretty exciting. Rodney or whatever his name is from The Cassandra Complex told me something to the effect that his lawyers would consider me using Cassandra Datakill as a band name trademark infringement, so I had to change the name of my project. He wasn’t an asshole or anything, and I know they had a right to protect their name, I just didn’t see why they’d care. It’s not like anyone would mistakenly buy my record when they meant to buy theirs. It was just easiest to shorten the name to Cdatakill. It doesn’t have anything to do with the music. It’s a little cheesy with the ‘data’ and the ‘kill’, I know, but at least I don’t have ‘Christ’, or the name of some corrosive substance, or some vampire or military reference in my moniker. Matt from Larvae and I tested that equation as the perfect generic industrial band name generator when we were bored on the trains on tour. 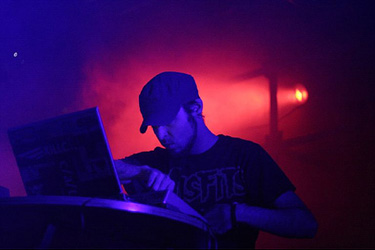 6 – 2006 marked your first performance at the highly-distinguished German electronic music festival, Maschinenfest. How would you describe your experience?

It was insane, I really had a blast. When Nick (Antigen Shift) and I first showed up we were pretty tired, and Maschinenfest was the last date on our European tour. But everything was really well organized and professional and we didn’t have to deal with any soundcheck scheduling issues or any of that. When we first got there I think I was the only American around and everyone seemed to already know each other, so I was a little out of place. But everyone was very kind and it was really nice getting to meet the people whose work I admire. Once all the bands showed up we just partied with some of our friends we’d met in the past and got to catch up. The crowd was amazing, I really couldn’t have asked for a better a crowd. All in all, Maschinenfest was incredible. It’s probably one of, if not the, best shows I’ve ever played.

7 – On the same tour, how were your European shows with fellow Ad Noiseam artist, Antigen Shift, received by audiences?

We had great audiences on tour. People seemed to really be into the music, and after talking to them we found out that a lot of them we’re pretty familiar with at least a couple of the records either Nick (Antigen Shift) or I had done. It was really nice to have that kind of support, especially after a few days of no sleep or showers. I think the only time anyone wasn’t super cool was when this one drunk skinhead guy in Linz was talking shit about maybe fighting Nick and I unless we played “more ‘ardcore!” or something that. We didn’t pay him too much mind. I don’t think he understood that we’re from places where a lot of people carry guns all the time, so he’d have to be a lot “more ‘ardcore” to get our attention. But for the most part our audiences were amazing. 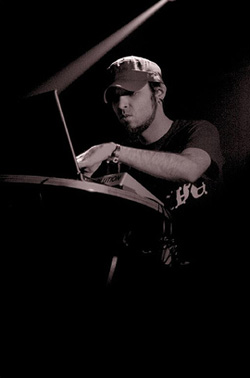 8 – In addition to Cdatakill, you are currently working on another project called Black Collar Crime. Can you tell us more about it?

Black Collar Crime is comprised of myself, our guitarist Twist, and the infamous Mr. Kneger Achi. It started out as just Twist and I jamming out some noise-guitar over some raw-programmed Akai beats, but over time it’s been evolving to include Achi on some beat programming as well, and we might work with other friends in the future. It’s definitely a very open collaboration and we just try to put together something that jams without over-thinking it. We’ve been getting very positive feedback from the people who have heard the tracks, which is awesome. We’re currently trying to finish the handful of tracks we’ve written so far. Once that’s done I guess we’ll put together a ‘demo’ or something, who knows? We’ll figure that out when we get there.

Out next is a two-part release called Bleeding Hearts Vol 1 & 2. They will be two separate 12″ vinyls on Ad Noiseam released a couple months apart. The records feature remixes of tracks off of Valentine by DJ Hidden, Enduser, Lapsed, Ubergang, and some other favorite hooligans.

I’m currently working on a split with Mothboy and hope to have my tracks finished up soon. We’re remixing one of each other’s tracks, which I know will lead to some insane results. Once I finish this record I’ll start working on the follow-up to Valentine.

I’m supposed to tour Europe in the spring, which I am very excited about. I should be in France mid-May, but that’s all I know right now. As soon as details are available Ad Noiseam and I will post the dates.

10 – We’d like to thank you for your time. Do you have any final comments or requests?

I do have one request: I want to see Sammy Hagar and David Thrussell from Snog in the same place at the same time. See… never seen it, have ya?! I have a sneaking suspicion that Mr.’Thrussell’ can’t drive 55, if you know what I mean. :-)