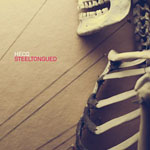 I have to admit that up until my receiving of his latest album for this review, my knowledge of Hecq’s music has been limited to the various compilations and numerous remixes he’s done. I had never actually heard his own albums. Big mistake, I’ve totally been missing out! “Steeltongued” is a double album, with CD 1 being the album proper, and CD 2 being a remix album by various artists. The music on “Steeltongued” has proved to be an exceedingly difficult beast to review. I suppose it could be described as clinically cold and ultra complex, off-kilter IDM juxtaposed with vast, lush, multilayered illbient soundscapes, and both minimal and epic orchestral pieces.
The opening track preps up the listener for what’s to come: it’s a heavy, melancholy and brooding piece that slowly reveals a distant undercurrent of staccato glitches, creating an eerie atmosphere worthy of a David Lynch movie soundtrack. As soon as you get to the second track, it becomes apparent that the glitch noises of the first track were a warning. At the risk of spoiling it for you – the sudden barrage of aggressive, disjointed beats and sounds seems so chaotic and uncontrolled at first that it’s almost as if they have a life of their own. In an instant, the atmosphere has shifted from being eerie to being panicked and schizophrenic. You almost feel as though the song is attacking you, somehow. As the track progresses, you start to understand what’s happened. He’s flipped everything upside down. The melodic, ambient compositions of the previous track now flow distantly underneath a maelstrom of unending, broken beats to startling effect. He does this a lot throughout the entire album – playing with the listener’s senses, catching them off guard, provoking both intellective and emotive responses.
As nightmarish and frightening as it can be, there is also a lot of beauty to be found on “Steeltongued”. Some of the songs are even quite catchy, dare I say danceable, all things considered. And Hecq has also managed a truly massive abstract rap song together with none other than Nongenetic of Shadow Huntaz fame.
The production on this album is nothing less than stellar, and the attention to detail is astounding. There are just so many subtle, almost subliminal, melodic passages and sound textures that it almost seems unreal at times. This coupled with the epic compositions and the onslaught of glitched up mechanical noises and electro-acoustic sounds that at times are so unrelenting and intense… I’ll put it this way: if music could ever be manifested as wine bottles, what Hecq has done is the aural equivalent of getting me drunk off my ass and the breaking the goddamned thing over the back of my head. And I haven’t even gotten to the second CD yet! My mind’s not completely made up about whether or not the second CD needed to be there though. It’s interesting, and the remixes are all really good – my favourites being the Xabec, Raoul Sinier and Mothboy tracks – and they’ve managed to convey a greater sense of coherency throughout the remix CD than most remix albums do. But it doesn’t add so much to the album as a whole. But I digress.
In closing, this is one hell of a release. And in my book, Hecq has now earned himself a place amongst the ranks of Autechre, Squarepusher and Boards of Canada, both in terms of ingenuity and songwriting skill.