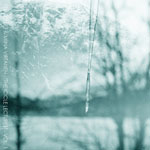 The story behind this release is that Tobias Fischer – the man behind Feu Follet – saw an ad for Finnish composer and pianist Miina Virtanen’s CDs in a magazine he writes for. Within 2 months he had contacted Virtanen and “The Icicle Lectures Vol. 1” was reality. Included on the CD is a 7 1/2 minute track of Virtanen’s piano music which Fischer then takes and turns into a lengthy 34 minute soundscape.
Virtanen’s track starts out gentle and sparse, slowly building in emotion and intensity as it progresses. Largely composed of Virtanen’s own music played on piano, “Silence Thoughts II” is a melancholic and expressive exploration of thoughts and feelings set to music. Sometimes quite gentle and heartfelt and at others impassioned and anxious, “Silence Thoughts II” builds in feeling as it slowly moves towards it close. Using Virtanen’s track as the basis for his own composition, Fischer reinterprets the mood, feeling and emotion of her original piece and adds his own touches to augment and develop the concept. Taking elements of the original track, Fischer opens “The Icicle Lectures Vol. 1” with a gentle piano theme, almost like water dripping in an isolated pool. Sometimes adding electronic backing to Virtanen’s playing to provide extra atmosphere and sometimes concentrating solely on electronic drones and sparse, almost non-existent tones, Fischer explores the ideas presented in the original track and expands on them in his own style. Often spacious, gentle and minimal, Fischer combines the gentlest of electronic tonal drones with excerpts of Virtanen’s piano playing to create an emotive yet serene and atmospheric ambient piece that is beautiful, sad and calming at the same time. Occasionally exploring more psychedelic and hypnotic expression “The Icicle Lectures Vol. 1” is predominantly themed around ambience, mood and emotion with a sense of open spaces and freedom throughout. Always subtly changing, whether in tone, mood or style, “The Icicle Works Vol. 1”, is a carefully crafted piece of ambient listening music.
“The Icicle Lectures Vol. 1” follows Fischer’s debut “Toi Et Le Son” for the Einzeleinheit label in January 2006 and picks up on the themes introduced by that album. Subtly shifting drones and absorbing ambient soundscapes are Fischer’s speciality it seems and it will be interesting to hear more from him in the future. Virtanen is also a talented musician whose music plays a key role in the mood, emotion and scene setting created by the music presented on this album.