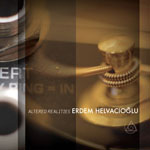 The contradiction of Erdem Helvacioglu’s “Altered Realities” lies in its title, one that boldly claims the latent ability of its musical contents to have somehow shifted, warped or otherwise transformed the metaphysical concept commonly understood as reality. This claim can be interpreted on a number of different levels, but what is most illuminating is the method used by Helvacioglu, currently pursuing a PhD in electro-acoustic composition in Istanbul, to produce the album’s seven tracks. According to Helvacioglu, “Altered Realities” consists of solo acoustic guitar and live electronics; all compositions were recorded in real-time, directly to DAT, without any overdubs, mixing, post-processing or use of previously recorded material. Additionally, all electronic textures were created based solely on the acoustic guitar signal. One might then propose that the album essentially is reality, albeit recorded. But here we encounter the semantics of the terminology involved. Helvacioglu has undertaken a project of depicting reality through a combination of sound (acoustic guitar) and presence (real-time format), yet at the same moment has altered that particular version of reality with the clever implementation of electronic manipulation, also born of a moment concurrent with the beautiful guitar work. From the outside we have a pristine and complex album encompassing what is in essence a live performance, yet from the inside we understand the fundamental reality of that performance to have itself been played with, or altered.
Most compositions on “Altered Realities” fall between seven and eight minutes in length, though by nature of the instrumentation and recording technique, each individual piece seems to stretch and yawn into the others, overlapping and unfurling through various layers of tranquil sound. Helvacioglu’s nimble strings and electronic flourishes are intimately paired, the swirling permeations of each drawing upon the other to shape ambient passages rich in hue and texture. Subdued melodies and tones like calm ocean waves gently break and wash over effects processor tinkering, engendering a range of atmospheric sounds that flutter with the delicate intensity of insect wings, or crystallize with the slow certainty of freezing liquids. The serpentine evolutions of Helvacioglu’s majestic compositions guide the listener ever upwards, striving for impossible mountain aeries poised above the clouds. From the opening “Bridge to Horizon” and “Sliding on a Glacier” through my personal favorite, “Pearl Border on a Dune,” to the closing “Ebony Remains,” the sublime odyssey of “Altered Realities” is an inspired nomadic epic, and although there exist some moments more shadowed than others, it is overall a joyful paean of spiritual awakenings.