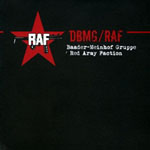 Normally, I am not one to draw inspiration from the life and actions of fanatics but the appeal of the underdogs, rebels fighting against a supposedly corrupt system, is well known. More often than not, the idealization of their lives and actions can go beyond their effective real-life relevance, influencing fields outside their original aim. Such is the case of Andreas Baader and Ulrike Meinhoff, whose decidedly criminal actions in the 70’s are still rather fresh in German memory, who served as inspiration for this music and multi-media project. With this release, DBMG/RAF became also a platform for collaborating artists to experiment with unbridled aggression and violence in the creation of their art, with said artistic freedom subjacent to an ideological motif.
Despite the complex percussion and frantic screaming that provide a unifying current throughout the album, the end result is still an uncategorizable beast of raw aggression which, flirting with as many music styles as there are collaborating artists in the project’s roster, makes concessions to none. From gritty industrial and intense power electronics elements to touches of techno and rock, through brooding ambient, DBMG/RAF mentor Joshua Richardson and his guests deliver an excellent showing of creativity and talented musicianship, coherent from beginning to end. The themes explored as musical allegories range from references to the genocide, the right to self-determination of minorities and land occupation to drug experimentation and mental illness. Overall, the album flow is quite good; from the intense opening of “Musth” DBMG/RAF consistently maintain the intensity without becoming tiresome and keeping the listener’s attention, until finally allowing some respite from the aural pummelling in the later stages of the album which concludes with the mildly stressing piece “Anhedonia”.
While quite a few people would certainly beg to differ, it would seem that at least one good thing came out of Andreas Baader and Ulrike Meinhof’s actions and ideology, if they managed to inspire the creation of a piece of work such as this album. As far as debut releases go, it is not often that one comes across something as solid and promising as this and it sets a pretty high mark for Joshua Richardson’s future artistic work.