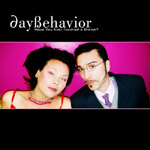 Almost a decade after their debut album “Adored”, Swedish synthpop duo Daybehavior release their second album, “Have you ever touched a dream?” which is, in all levels, a dream-like work of beauty in the genre. Paradoxically enough, the album screams “classy kitsch” (if there is such a thing) from beginning to end, artwork included.
In terms of overall sonority, Daybehavior are clearly influenced by early 80’s synthetiser music and comparisons in style to bands like the Pet Shop Boys are quite inevitable. In addition to that, some of the extremely catchy songs in this album are strongly reminiscent of euro-disco with the occasional trance touch here and there. Most of the songs in this album have quite good dancefloor potential while at the same time finding themselves very enjoyable as causal listening.
In spite of the quality of the music, the strength of Daybehaviour and what makes them really stand out is the characteristic voice of singer Paula Crescentini. Her singing is single-handedly responsible for giving Daybehaviour songs their dream-like quality. Interestingly enough, if one is to judge from the song “La Commedia”, the effect of Paula’s voice might be much greater when singing in Italian. Pity that there is only one track sung in Italian.
Particularly interesting in this album are the songs “Mon :Ami”, the almost sorrowful “I never died before” and the aforementioned “La Commedia”. For some reason, the almost-sassy and definitely euro-trash “Superstar” kept reminding me of Abba.
The bonus remix disc is an interesting freebie with quite a a few good takes on the original music, especially considering that several of mixes were chosen from an open competition.