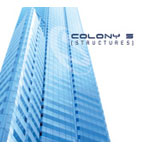 “Structures” is the second album of young upcoming band Colony 5, a Swedish band which began in 1999 without any intentions of becoming a ‘serious’ project. Four years and two albums later, what was initially a Synthpop band, evolved into harder and faster-paced musical structures and it seems that Colony 5 are something more serious nowadays.
Though not exactly innovative, “Structures” is a very talented Electro-pop album, flawlessly blending and incorporating influences from other music styles like Synthpop and EBM (noticeable in the beat structures). Despite what it may lack in terms of real innovation, it more than makes up for that with a fresh and vigorous approach to the Electro-pop genre.
Pretty much all the songs feature extremely catchy melodies that one will not forget so easily, an effect which is intensified by the good vocals of lead singer P-O Svensson. The vocals seem to be seamlessly integrated into the musical arrangements so that everything works in unison.
Content-wise the lyrics are also quite acceptable even if they’d need a bit of polishing. As would be expected in this genre, there are quite a few songs dealing with feelings and relationships but there is also a marked science-fiction influence in the texts, especially in the song “The Zone” (inspired by the Strugasky brother’s novel “Stalker” or Tarkovsky’s movie adaptation of the novel in question).
As a bonus, the CD also includes a multi-media track with the video for the song “Black”. Primarily shot in black and white, the video consists mainly of footage of Colony 5 performing live in concert, intercalated with stills of the band and some shots of ‘the girl with black eyes’. A good video, not jaw-dropping but definitely interesting as it allows a glimpse into what Colony 5 are like on stage (one would guess very energetic).