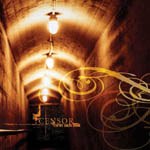 Released by the Texan label Hive Records, “Empire Holds Down” is the very promising debut album of NY-based electronic musician Censor.
In essence, this is a drum’n’bass and hardcore album with heavy influences from other music styles, from Industrial and Power Noise to IDM and break-core. Censor masterfully merges these influences and skillfully hops between them adding melodic touches, creating a highly interesting and organic whole that is greater than the sum of its parts.
Panacea, who also produces a musical fusion of styles based around drum’n’bass, is the inevitable comparison for Censor’s work. The most striking difference between the two is that Censor has a more melodic approach to his music with the development and intelligent use of orchestrations layered into the rhythmic structures.
“Empire Holds Down” is remarkable from the point of view of the emotions and images it conveys and might well be seen as the soundtrack describing a desperate and solitary descent into the abandoned subterranean depths of a dystopian urban jungle. It is frantic to the extreme as well as oppressive, becoming extremely claustrophobic on several occasions, in a relentless rhythmic assault which leaves little room for pause or reflection. The few occasions in which the frantic pace is abandoned are not unlike the calm in the eye of a storm, a momentary respite at best, and equally oppressive. The incorporation of melodic orchestral layers into the rhythmic compositions further enhances the feelings of subterranean oppressiveness; it also adds a sense of coldness to many songs, increasing the feeling of solitude.
In addition to the tracks by Censor, there are four remix tracks by Larvae, Needle Sharing, Displacer and DJ Hidden. While not exactly essential pieces, they are welcome additions to what is already a great album.