Alexander Veljanov is mainly known as one of the founding members of the German darkwave ensemble Deine Lakaien. A few years ago Veljanov presented his solo debut with the album “Secrets of the Silver Tongue”, followed in 2002 by “The Sweet Life”. Both albums presented a departure from the established Deine Lakaien sound, towards a more personal vision, both musically as well as lyrically.
On the occasion of a concert by Deine Lakaien in Leiria (Portugal) the opportunity of an extended interview with Veljanov presented itself and was immediately taken. 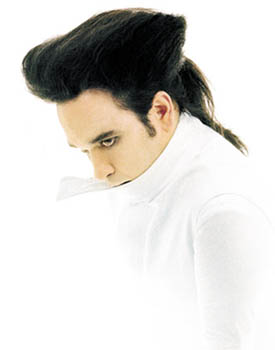 C.B. – Considering this was your first time in Portugal, what are your impressions about the country?

I did not see so much of the country but I spent some days in Leiria and that was a wonderful experience. The people were very friendly, fantastic and I really enjoyed playing our show for the audience. I hope to come back again to your country.

C.B. – What were your expectations before the concert in Leiria, especially audience-wise?

I had no idea about it. I did not know at all if there would be people who want to see a DL concert.

C.B. – Since most of the Portuguese audiences never had the opportunity to see Deine Lakaien perform on stage, a rigid and very formal concert was expected. However, the overall feeling conveyed was one of spontaneity and a relaxed attitude.
Would you care to comment on your stage posture? What are your thoughts when you are on stage?

We came to Portugal without any expectations, we just felt flattered that they invited us. The hours before the show were so comfortable that we had the chance to go on stage and feel very relaxed and also hungry to show our best. I think that the people understood very soon that we are not pretending something and accepted our true music.

We didn’t make any acoustic tour after 1996, but sometimes we played acoustic special shows in Germany and in other countries like Greece, Netherlands, and Belgium. We do play these shows because they show the very truth about our music, and if people like this they maybe invite us again with the whole band lineup.

C.B. – How to you feel about the possibility of a return to Portugal for more concerts, either as Deine Lakaien or solo as Veljanov?

We will always come back , whether with DL or any solo-concerts. But only if the people really want it, not for promotional reasons only.

C.B. – In your concert, the ease with which you ‘played’ with the music and with the instruments was noticeable and surely the result of many years of practice as well as talent.
Can you tell us about your and Ernst Horn’s musical background? Nowadays, do you keep a ‘steady’ practice with scheduled rehearsals or do things come more or less naturally?

We have worked for so many years as musicians, especially with DL, that it is not necessary to plan something special. We are who we are and of course we always practice to improve ourselves, but we don’t have to force anything.

C.B. – A Deine Lakaien DVD was scheduled for release in November. Could you tell us something about that release and what news does it bring in terms of Deine Lakaien material?

It is a document of our last Tour for the WHITELIES-album. It is nothing special, just the possibility to watch a whole DL-concert on TV at home. :-)

C.B. – Looking back to the beginning of your musical career, how would you describe and comment the evolution of your musical work? Any particular feelings come to mind when thinking of that evolution?

We started in 1985 and always tried to develop an individual style of music, not copying any other bands. I know that we managed to do that and now we can offer a lot of music to people who want to join our world of fantasy. 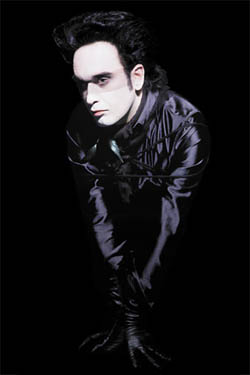 C.B. – After the “White Lies” album, can you offer us some insight into what Deine Lakaein are currently working on? Any ideas as to what can be expected from an upcoming album?

We are working again on new material for DL, but also solo projects. In the near future we are planning to do our 20th anniversary shows with special surprises.

C.B. – One of the less known aspects of your creative work is your involvement in theatre and cinema projects. What is some of your past work in these two fields? Are you currently working on anything related to them?

I make some music together with Goran Trajkoski for Macedonian theatre performances and for a new CD. He is also well known for film music (Before the rain, winner in Venice 1997, Oscar nomination for best foreign film), he has two very interesting bands in Macedonia called ANASTASIJA and MIZAR. I also work with my producer of the two Veljanov-CDs, David Yound from London, on new material.

C.B. – Being involved in projects related to other fields of creative work, one could ask what influences your and Deine Lakaien’s music (and how)? And what would you say influenced the imagery and behaviour on stage?

I have no idea what really influenced my stage behaviour but I know that I don’t want to be an entertainer, I prefer to behave like an actor. Maybe my work at the national opera of Munich influenced me a little bit. I prefer fairytales, don’t want to show myself on stage. You will never see Alexander on stage, it will always be Veljanov.

C.B. – Do these influences extend to other aspects of Deine Lakaien and not just the music? I’m referring to visual conception of the band and surrounding design (CD booklets, website, etc).

Same again, we don’t want to show us as private beings , we play the game and the visuals are much more connected to the colours of our fantasy world.

C.B. – What would you say are the differences between Deine Lakaien and Veljanov solo work, musically-wise? Is there a crucial factor that influences your creativity?

DL is always about the same questions, we try to show different points of view on the same important questions about life . Sometimes people misunderstand us especially our cynical or pessimistic lyrics. They think it is our personal attitude and expressions although we just want to paint different characters.
Veljanov solo shows more about myself, maybe, I do not know, just listen, and try to understand.

C.B. – With Deine Lakaien existing for over a decade, with such a simple and effective formation, what motivated solo work by Veljanov?

We always tried to find breaks, we have to work in different contexts. We would not have existed for such a long time if we would have become prisoners of DL.

C.B. – “Secrets of the Silver Tongue”, the first Veljanov album takes the listener to an introspective world, where there are “confessions”. Do the lyrics refer to personal experiences or are they simply poetic subjects?

I am very pleased tat you even know my first solo album, thank you. It is full of Veljanov thoughts and truth, I tried to get rid of my “prince of darkness” image, but did not try to get rid of my serious aims, I made a record full of emotion without using typical darkwave-sounds. Some did understand and some did not.

C.B. – Also about your first album and the guitar work in it. What was the objective: making it an almost acoustic album or creating a voice/instrument duality not unlike the one found in Deine Lakaien (but without the electronics)?

I made many interviews for this record, but this is one of the most intelligent questions ever. I thought that I had to do a solo record without any electronics, because Lakaien were always regarded as the electronic-pioneer darkwave-band in Germany ever. For a singer and a front-man of a successful band it is always very hard to make a solo record and so I decided to avoid any electronics on my solo debut. I wanted to show that it is the music, which is important not the style/arrangement.

C.B. – “Sweet Life” was your second solo album. Does the title have any particular meaning, as far as your attitude towards life? Can the album be almost considered a call to notice the world around us?

The “Sweet Life” was indeed an album full of thoughts about life in general and the expectations people have and the things they expect from life.

C.B. – How do you feel and view your artistic creation as related to your personality and your life in general?

I avoid thinking about myself as an artist. I am just a human being who has to handle the same things as anyone else. Maybe I just think too much about the fact that we can try so hard but will always know just a tiny little bit about the whole question.

C.B. – Your solo work has an ‘exotic’ touch when one is used to the electronic sonorities that appear in Deine Lakaien. Was this intentional from the beginning or the result of experimentation while composing?

I just want use the possibility of total freedom concerning style and influences. I know that it would be much easier to fulfill the expectations of people who just want to see the dark icon in Alexander Veljanov. I always did not think about to deliver what is expected. I love to surprise and to confuse, also myself.

C.B. – Can you comment the following comparison: Veljanov’s “Longer Longer” vs. Leonard Cohen’s “Take this Waltz”?

Thank you very much, but I hope it does not sound like copying… :-)

C.B. – We’d like to thank you for accepting to answer this interview and we hope to meet you again in the future. Do you have any final words?

I really enjoyed the kind and friendly atmosphere in your beautiful country and would like to come back again soon. Thank you very much for your interest and enjoy music, there is so much to discover.