Null Device’ Eric Oehler has a major inability to avoid mini-golf water hazards. He’s hit at least six of the last seven, even in circumstances where there’s no law of physics supporting how the hell he could do it.

We’re playing a game at George Vitennes Mini Golf in our hometown of Madison, WI. We just had sushi down the block, too. Why are we doing this? As I said to Eric: “Hey, I can actually do an interview in person for once, so let’s actually do something interview-ey so I don’t have to ask the same old questions.”

Since going to a strip club is a bit too expensive and getting drunk and going to the mall to annoy people was ixnayed by Señor Oehler, we figured the one-two highbrow-lowbrow punch of sushi and mini-golf would do the trick.

So we played through on the new indoor golf course, which was slightly overpriced but had a difficulty level that would frustrate a player if they actually gave a shit. Eric and I even used the indoor remote control boats. I was a pirate ship with a cruddy rudder and was nearly capsized by an overzealous 4 year old on a sugar high. I should have pushed the bastard into the drink.

But that’s not the main reason Eric and I are on this hot date. We’re here to talk Null Device. 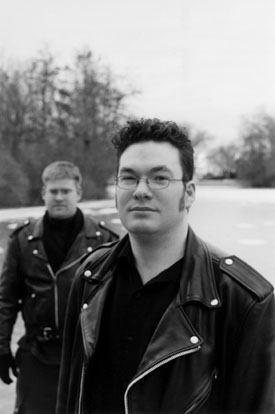 For the uninitiated, Null Device is what I like to call a band that has evolved. Started well over a decade ago by Oehler and college friend/main lyricist Eric Goedken and spawned from the same scene that also produced both Stromkern and Oneiroid Psychosis, Null Device has gone from a slightly askew synthpop/EBM hybrid and evolved to a completely askew creative endeavor that combines so many styles of music and lyrical invention (Oehler basically learned Turkish to sing in the language on the last album) that, to say the least, I find the music and sonic adventures the band take exhilarating.

Eric and I sat down for sushi and putt-putt to talk about their latest album, “Excursions”, the major changes in Null Device’s line-up, and inspiration.

Matt: So here’s an easy question, hopefully– what the hell took so long to get this CD out?

Eric: A number of things. First – new gear. I had to learn a lot of new software. Second – I had to wrangle some guest musicians, all that junk, and somehow fit it in between band practices and all that stuff. Third – frankly, life was busy. “Excursions” is a more complicated album, and it just took longer with all the other stuff going on.

Matt: Would you consider this CD a departure from earlier Null Device concepts and CDs, or simply as a continuation of where you’ve always wanted the music to go?

Eric: In some ways, it’s a bit of both, if that doesn’t sound like too douchebaggy and answer. Is douchebaggy a word?

Matt: I think it is, but it’s me we’re talking about here. How much influence is Eric [Goedken] on the finished product of a Null Device CD? Was there ever a track he absolutely hated that you pulled rank and used or anything? Or lyrics he loved that you simply didn’t know what to do with?

Eric: I don’t think it ever came to that. There were discussions about how things fit, and every now and again I’d say “Look, I really like that snare drum part there” or something, but it usually ended in some compromise. He’s got a better pop sensibility than I do so I do well to listen to him. There were some lyrics that I just could not figure out what to do with. I tried maybe three times to write a song around one set and it didn’t work right at all.

Matt: Has there ever been an issue where Eric thought you totally missed the mark with his lyrical intent? Like an upbeat song with depressing lyrics, or something.

Eric: That’s not usually a problem. I tend to pick lyrics that match the song, or write songs to match the lyrics.

Matt: In the last 6 months the band has taken a fairly large hit since the summer with the exit of live guitarist Dan Clark (of The Dark Clan). What happened there?

Eric: Dan’s just stretched thin. The Dark Clan is working on material, Dan’s got his work with Stromkern, and he’s got a bunch of other projects in the works, and I suppose the weekly commute here from Milwaukee takes its toll.

Matt: It was definitely amicable of course. I mean, I think Dan is one of Null Device’s biggest fans.

Eric: …and I still see him regularly, make fun of his hats, talk about Achewood, and all that. I decided after he left that he couldn’t be directly replaced. Putting a new guitarist in just wouldn’t seem right.

Matt: So what have you done?

Matt: Okay, for the readers, what the fuck is a urdu ghazel? I mean I know (Ed. – Matt had no idea) but I don’t want to lose anyone here.

Eric: An indo-persian lang… look, just write down what I tell you to write down, okay?

I quickly write down the many nerdities that Eric spouts forth, as we indulge in Unagi and various other sashimi and sushi. It should be noted here that Eric not only has a varied multicultural love of music, but the mofo can cook like no tomorrow. Just ask Assemblage 23 about his brisket.

Matt: So now that you have 2 Goedken family members in the band, how has the live show changed? I’ve heard great things about the new line-up.

Eric: Well, for one thing, we don’t have a monster half-stack obliterating the monitor mix.

Eric: You’re familiar with this problem, I understand.

Matt: Do you feel more pressure to “Frontman” since Dan was obviously someone you played off of a lot?

Eric: Yeah, it’s tricky. With a bouncy Dan there I always had to push myself to keep up. I mean, I can’t be upstaged now, can I? Jill’s pretty boppy in her own right, but she’s behind a keyboard so that limits mobility. That’s the great curse of electronic bands – It’s hard to run around when you need to play keys. And keytars don’t count.

Matt: I think one of the nice things about Null Device I’ve always liked live is there’s a real seriousness and beauty to the music but the shows are very warm and light-hearted.

Matt: It sounds like that’s been maintained with Jill, even without Dan’s manicness.

Eric: Exactly. I don’t want to be one of those assclowns that takes themselves too seriously. I’d be just one step away from recording “Live at The Acropolis” (Ed. – That’s a Yanni live album and no, Matt didn’t have to look it up. But I did. Fuck you.).

Matt: Plus with all the styles intermingling in the music it’s just FUN and you guys show it. So how has the reaction to the new material been?

Eric: Good, so far, although we’re still finding our live feet, so to speak. It’s been sounding great, but we do need to figure out what sort of tracks work best with what kind of crowd. 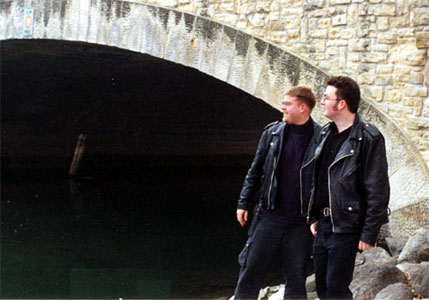 Matt: Out of curiosity, do you think the people who know about Null Device give it the respect and chance that they would more traditional “synthpop” bands– I’ve always thought there was a transcendence of what Null Device has done, especially with the last two CDs, but it’s interesting to me how you’re definitely one of the bands other bands love, but the general “scene” doesn’t always get it unless they see you live. I don’t know, maybe it’s just me.

Eric: Yeah, that’s a pretty fair assessment. We always seem to go over well with other bands. (pause) We used to be met with a lot of skepticism at some more traditional synthpop shows… especially when we’d have a guitarist setting up an amp and we’re there with only one keyboard and some ethnic drums.

Matt: Have you played a lot of “non-scene” shows? With bands that maybe better suit your influences?

Eric: We’ve played a few, and it’s hard to find those. We’ve played with pop bands, space-rock bands, trip-hop bands…its always tricky to try and figure out what’s going to work with whom a few times we’ve completely miscalculated and ended up headlining to an empty room.

Matt: I’ve seen people who have no idea who you are freak out to you – non-electronica people. You win people over live.

Eric: Ned [Kirby, of Stromkern] said I need to find a second percussionist with a name like “Sanjay Dasgupta” and then I’d be set.

Matt: (laughing) So do you think that people think there’s a credibility issue with a bunch of white kids doing this?

Eric: We try. We tend to do best with non-scene people than with scene people. Well, from the standpoint that my Panjabi is pretty hackneyed, that does hurt us a little.

Matt: I think people are impressed with the attempt, as you’re not necessarily co-opting the style but paying homage… givin’ props, if you will. There’s a real love of the music there that you, or at least I, don’t see too often.

Eric: That’s what I hope. There was a Sikh guy in an audience who was shouting props when I pulled out a tumbi at one show. In the end, that’s the reason I do this. I love the music and want to try it and play around with it. If I were really concerned about being super-popular, I’d be in an indie rock band or something.

Matt: I remember that show, with someone freaking out at something like that. I was smiling that whole show.

Eric: That was a fun show

Matt: To me, it’s a real “See motherfuckers! It’s not just our lil’ scene that appreciates this!”

Eric: Although I learned a valuable lesson – never lead off with stage banter about the Holocaust.

Eric: I mean, yeah, that’s what “Footfalls” is about, but, man, that kills a room!

Matt: nothing stops momentum and good times like a Holocaust story.

Eric: Eeeeyeah. But that said, that was still a pretty good gig.

And with that I bid Eric adieu, having beaten him substantially on the field of putt-putt, but coming nowhere near him musically… 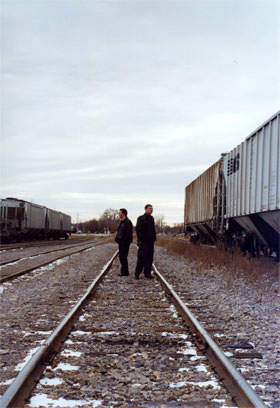