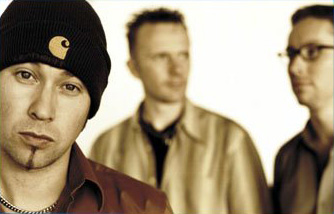 Mesh! Ah, Mesh… “Trust you”, “Confined”, “The purest people”, “The damage you do”, “It scares me”, “Confined”, “My defender”, “Firefly”, “Leave you nothing”, “No place like home”, “Petrified”, “This is what you wanted”, “Room with a view”… An incredible collection of unmistakable hits, that kind of songs that invades your head and never gets out, the warm and vibrant voice of Mark Hockings, melodies which are scratching your heart or making you fidgety, in a word – that I say straight out – one of the best, perhaps even the best electropop band in all the world! Since Depeche Mode are getting older, Mesh are taking over and raising high the flag of the killer popsong, as only (almost) English musicians know how to do. Very friendly interview with Rich Silverthorn, the much inspired composer of the band.

First of all, a question never asked but important according to me: why such a name, MESH ? Does it mean something to you ?

I’m afraid there is no real meaning behind it. When you start a band, coming up with a name is really difficult and can take up too much energy and time. Mark suggested “mesh” and we all just said “yep” that’s fine.

You are from Bristol, a town known as Massive Attack and trip-hop’s nativeland. Did living in a town fond of music help you for your carreer or not? Was it a good motivation to compose or do you dislike trip-hop stuff?

I think Bristol is well known for its trip-hop but there is a lot of other music happening here as well. For us living here it was not really an influence. We all grew up listening to early electronic music and our motivation to start making music stemed from there.

People often compare you with Depeche Mode, wich is postive. Are you upset by this?

Ahh… OK, if people say it in a complimentary way, meaning we write good songs and melodies then it’s fine, but if people try and imply we have copied them in anyway then this really pisses us off. Depeche Mode are a fantastic band and I do own some of their music in my collection, but they are one of hundreds of bands I listen to, what would be the point in trying to sound like them? The greatest compliment we get is people saying other bands sound like us, which means we have our own distinct sound. 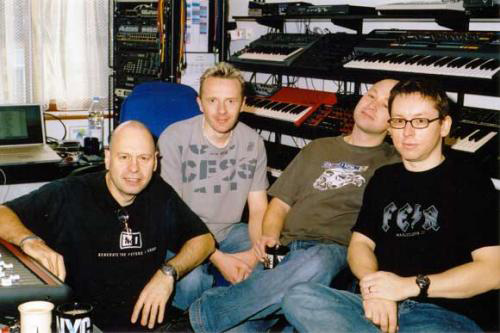 Do you think the fact that Depeche Mode and you have the same engineer and co-producer Gareth Jones could reinforce that comparison?

No, usually we write, record, produce and mix ourselves but with this album our record company wanted to try and use some outside help for a change.

Gareth’s name came up when we were about to do “Who watches over me” but we were concerned about his close relationship with Depeche Mode and thought it may not be a good decision to work with him, although the guy’s a legend in the electronic music production world. So when his name came up again we though we would look at the production work he has been doing recently and was surprised at the wide range of projects he was involved in, one of which was Embrace’s album which was currently at number 1 in the UK charts at the time. This swayed our decision. Another thing we were after was someone who had done on rockier bands not just electronic stuff.

The decision was the right one, Gareth was a great guy to work with, totally in tune with what we wanted to achieve with this album and brought out the best of the songs he mixed. He is very focused and quite an inspirational person to be around. If anything I think Gareth suffers from the fact people only associate him with DM when he has done so many othe bands as well.

No one is a prophet in his own country: England doesn’t know you very much, though you are famous in many other countries, especially Germany, where tough music such as EBM is known. Do you believe that this country of beer and muscle like the “fragility” of your music?

Yes, most definitely, the Germans fans have been very receptive to our music…Every time we tour there it seems to get better and better. I guess it is our strongest territory. Having said that with the help of the Internet we have quite a extensive fan base throughout the world. England is a very difficult country to break through, trends for different styles of music move very quickly here. We can play a show in London and have 700 people show up but its still classed as “underground” yet a popular chart/radio band may only get 300??? Who knows?

About “Fragile” things, by the way, your past records were delicateand full of melancholy, featuring sad and beautiful songs, and sometimes guitar: on “We Collide”, the sound is bigger, with more guitars, almost rock music songs. Revolution or evolution in your quest for a new sound since Who watches over me in 2002?

Everytime we write a new album we try and evolve and push our music into different place. With “Who watches over me” reviewers said that it was a fantastic album but maybe too polished/commercial. With “We Collide” we wrote an album we wanted to. I think we tried to make it more edgy and rougher sounding, guitars helped a lot with that. We have always used guitars in our music but perhaps in a more textured way, so they sat back in the mix or were filtered down. This time we made them sound more conventional and pushed them to the front and perhaps created the more rockier feel.. 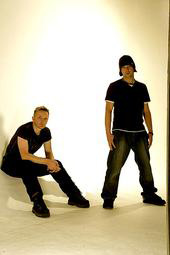 Do you try, with this new sound to reach a larger english audience? Or maybe your evolution has nothing to do with this?

You always hope that you will appeal to more people each time you release and album but there has never been a conscious effort to change in anyway to achieve this. I want the listener to like us for what we are not what we are trying to become. I think to break through in the UK at the moment we’d have to start doing indy rock or hiphop which I really don’t think will happen! ;-)

How do you compose your songs? Guided by your inspiration only or do you try to deal with the fans’s wishes?

No we tend to write from within and hope it touches the fans after. We write in 2 different ways: 1. I will write a complete piece of music and give it to Mark to add lyrics or 2. Mark will write a song and give it to me to arrange music around his vocals.

As a slight change with this album Mark was writing the demos in very basic form, putting them on cd and bringing them to the studio. This meant I had more time to listen to them and decide on a direction for them to take. It was quite an interesting process as some of the demos were mid tempo songs but ended up being very “up” dance tracks. On “This is what you wanted” I gave Mark a very electronic sounding dance track for him to write the lyrics to, then I changed the music to a dark guitar driven track but kept the same vocal take which gave it an unsettling and unnatural feel. The whole album was built up in this way.

Though the record “We Collide” sounds easier to hear for new people, except “This is what you wanted”, there isn’t any hit as in the past, you know, that kind of song that invades your head and you have it on your mind at least the whole day like “Trust you”, “Scares me” or “Firefly”… “We Collide” looks more like a whole global record, maybe with a concept. Is it, according to you?

Umm… I’m not really sure, I have read reviews of people saying there is at least 8 singles on this album… “Wow”, was my initial reaction. It is hard to say as we hear it in a different way to you and the listener. We have always tried to write a well crafted album that means something rather than opting for a couple of good tracks padded out with a load of shit like a lot of bands do.

Except on “No place like home” or “Room with a view”, pure wonders, we feel less melancholy and more anger, maybe rage throughought the record. Are you angry? Against the whole world? (Why not, after all !) Do you fight, and “collide” against that world of injustice?

It is a good way of letting of steam by putting your thoughts down in songs and preaching them to as many people as possible, but if the truth is known we are quite happy people. There is far too much injustice in the world (and the music industry) so it is just our way of dealing with it.

About the cover, why such a picture: a gun and a child game, hopscotch? Why is the gun on number 2? Have you killed the child in you? 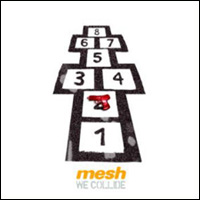 The cover is to represent that there is a confrontational side to all of us, even in childhood. Some people meet others collide.

Neil has left Mesh in september, for personal conveniance but in good terms and you remain friends, as it seems. You have booked a new keyboard player, Geoff Pinckney from Alien 6 (remixer for the “Crash” single), for live performance during the We Collide tour and hopefully more. Do you think to keep him as a full Mesh member? Or trying to catch a new member? Or going on as a duo?

Mesh has always been the writing team of myself and Mark so we will carry on as this. Geoff has been a fantastic new addition to the live show and I think we are stronger than ever before. I don’t think we will be looking for a full time replacement.

For all the French fans: will you go on tour here in France? When, where (no dates about this on your website…;-( )?

Ahh… We would love to do a show in France, I think the last time was a few years back with Apoptygma Berserk in La Locomotive. I think we are long over due for another show… Watch this space! :-)

Thank you very much !

Thank you for the support and best wishes!

— interview by Jean-Marc Ligny with translations by Peter Rainman (originally published on YAEW – Yet Another Electro Webzine, January 2007, used with permission)