pan.dem.ic [pan-dem-ik]
–adjective
1. (of a disease) prevalent throughout an entire country, continent, or the whole world; epidemic over a large area.
2. general; universal: pandemic fear of atomic war.
–noun
3. a pandemic disease.

The Pandemic came about when Tony Young decided to start a label himself after working for many years in the music business – mostly in promotion and for labels such as Peaceville in the UK and Wax Trax in Chicago. He is a fairly prominent figure on the Industrial scene being or having been active in several fields from artist promotion (with Sentry Music), to video intervention (in the form of past work with Alternative Perspective alongside Owen Brown), and as solo artist, as Autoclav1.1. His most recent endeavour is the record label ‘The Pandemic’, in partnership with Erica Dunham of Unter Null.

C.B. – I’ll start with questions about your project Tony, that being Autoclav 1.1. You’re now getting ready to release “Visitor Attractions”, your second album.
What was it that made you want to make music in the first place? Or was this already something you had in mind to work on at some point?

No, no I never had anything in mind of the sort. I remember when I was a kid, I really wanted to be in Iron Maiden or Slayer or any sort of band, then those feelings died as I got older and worked for record labels. I was just at a stage in my life again when I thought ‘hang on, surely I can have a pop at this myself’ and I did, and cool it’s all worked out. 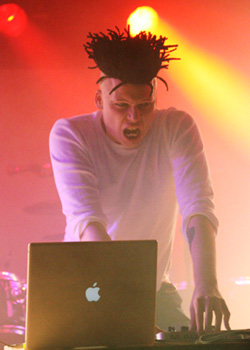 C.B. – Working in the music business, I guess that made you see things totally differently? In relation to wanting to be in bands and such, that is.

Well not really because the bands always come off worse. Not me though. It set me in good stead when sorting a deal.

C.B. – Obviously your experience of working for labels in the music business allows you to deal with labels now with your music and not get duped by them… did you get the best deal possible as it were?

I guess so and I won’t get duped – Crunch Pod are great. Similar way of doing things to me and a decent bloke running it. It’s all about trust, and I trust Ben and his label completely. I know the ins and outs so to speak and what to avoid. There is nothing to avoid with Crunch Pod

C.B. – Do you follow a particular theme with your releases? How is “Visitor Attractions” different to your first release “You are my all and more”?

No particular theme as such throughout. Obviously the debut album “You are my all and more” was a very painful transition. I wish I had other subjects I could have done and still had my little cat with me but unfortunately he became the subject matter. I hope it’s a fitting epitaph. I like themes and concepts so naturally the new album has to have one. Mainly it’s about all the wrong people in the world. People who try get stuff for their own gains, people who mistreat animals, and the way people are in general and myself. I am a misanthrope in a general sense and this you find in the album if you listen.

C.B. – How do you see yourself as a misanthrope, and how do you think the listener will pick up on this?

I have a general dislike of people as a rule. I have friends and things like that but I can’t help think the planet would be better off without us. Don’t get me wrong, watching people interests me but I generally don’t like them. There is a song on the new album called “miags”, you will work out the title when you listen. It has Squid who is a spoken word artist and he wrote lyrics that fit this perfectly. It has some collaborative bits from Pneumatic Detach too. Good guys.

C.B. – How do you see your music progressing in the future? What aspirations do you have?

None really, because I feel that would be laying down an agenda. I don’t want to stagnate at all and follow any set of rules. “Visitor Attractions” when it comes out is the perfect progression sound wise and everything. I won’t start writing for the third album until I am ready and whatever comes out when I start or what I feel.

C.B. – If you could collaborate with any one artist who would it be and why?

I always wanted to collaborate with someone blisteringly heavy, and now I have an opportunity with Navicon Torture Technologies, so have sent him some stuff to work with. There are so many really… Possibly The [Law-Rah] Collective. I have just collaborated on one track for the new album with Pneumatic Detach and It-Clings. Brilliant people I care for them both so much.

C.B. – Is there a part of the world you would love to play live in? And why?

Japan. It has to be. Just really think they would get me live. Crazy people. Maybe Australia and Italy. 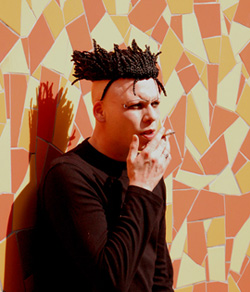 C.B. – What other projects besides Autoclav 1.1 are you working on? Any other releases due to be released soon?

Jamie from ESA and myself are thinking of this pure old skool EBM project, and a track has been formulated, possibly with the help of EVA|3 along the way. I actually want to do a neo-classical dark ambient project. I love that stuff.

C.B. – Forwarding to your record label, The Pandemic, how did this first come about? And why did you name it so?

Well I do promo with Sentry Music for many a label and artist and have worked for labels before so thought I am going to do my own. Actually this was two years or so ago now. The Pandemic was inspired by the bird flu thing we had recently in the world, hence the feather logo. Plus it sounds cool – ‘we are the pandemic’

C.B. – It makes it sound like your spreading some sort of disease!! Exactly, you’ve got it bang on. A good disease though

C.B. – What kind of music are you going to be releasing? Any artists you’d like to release work by particularly?

Anything and everything that fits at the time. There are many bands and too many to name here, plus it wouldn’t be a surprise then.

C.B. – What can we expect to see coming from The Pandemic in the coming year?

The first release out now is a pure old style EBM electro industrial project called Terretron. Its bloody marvellous stuff, with real energy and no rubbish, straight for the jugular with no messing about. I am going to do a 7″ for Scrap.edx (who is awesome) as no one does 7″s anymore, and the album for It-Clings vs. Pneumatic Detach. Pure energy, genius ramblings and insane song titles with that huge Pneumatic Detach sound. That’s out soon.

C.B. – Why did you choose to do 7″s? Is there a particular call for this sort of format or was it just something you wanted to try out?

No-one is bothering anymore. You can only feel like you have a true release I think when it is on vinyl. Makes me feel nostalgic about my youth.

C.B. – Now that you have your own record label do you see MP3’s and internet piracy in a different way? Do you have any hopes of combating this so it doesn’t affect your artists too much?

I have always seen it a different way. It’s wrong, pure and simple. With MP3’s comes that disrespect of an artist and music. I will not be putting my artists on iTunes, so some bloody kid can drop it into his download box to be picked up on Limewire/eMule later for free by anyone.

C.B. – So I’m guessing you don’t download MP3’s yourself then… at least not illegally?

The odd one now and again. I am not going to spend £13 on rubbish. If I don’t like it I don’t buy it. If I like it, I end up getting it. I won’t download the full thing. It’s not fair.

If you have to listen to a MP3 please make it with a scope for purchasing. Music is art.