Based in Novosibirks, Cold Graey is one of those cases which proves that talent and creativity are not the exclusive of established record labels, thriving equally well in a do-it-yourself setting. With a roster of very talented artists, most of them hardly known outside a very limited circle, this obscure Russian label is also worthy of note for the the care which they put into their extremely limited editions as each superbly handcrafted release is a work of art on its own. Definitely a label well worthy of attention, with plenty of new artists to discover. 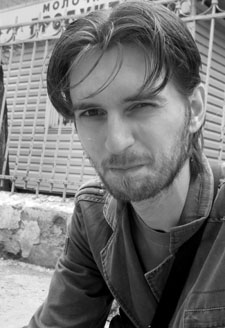 1 – How and why did you come about starting Cold Graey?

First, I started Misfake Studio to release my own projects: Indu Mezu and Instant Movie Combinations. Well, almost every DIY label starts this way. Since I released myself, I called it “a studio”, not label. Friends helped me with the distribution. Then we printed Algol. So, we work with other people, it looks like “label” :) Soon I understood, that I need my own distro, promo works and production. Just changed the name and started to make it real.

2 – When you started Cold Graey, were there any labels that you could say were a reference/inspiration for your efforts?

Sure, I was very inspired by friends: Zhelezobeton and Abgurd Subdivision. They made me feel that I could do the same with the time. And in the beginning I had no idea about the big world of DIY, Indies and all the limited editions stuff.

3 – Almost mandatory question, how did the name “Cold Graey” come about?

Some kind of totemic color and feeling. I called my first studio, where the Indu Mezu tapes were recorded, The Cold Plain. Cold Graey is just a progress of this name. “AE” is here for some mystical reasons.

4 – Since the inception of Cold Graey, are there any events in the history of the label that you’d consider as particularly relevant, from difficulties and setbacks to successes?

I feel mostly development. There are still more possiblities to try, than restrictions and problems. The most succesfull event is Myrrman. Also, people likes every new release of IMC.

5 – So far what would you consider as special highlights (or successful) releases and artists in the history of Cold Graey?

Stpocold is the best release to point on. Hope we will continue with it soon. Also, last three CDr’s set – Myrrman, Nedicry and Instant Movie Combinations is a good step into the future, both on design and on music. Myrrman is a solo project of the member of Reutoff – very well-known band, so it is very significant event for label. And it’s really personal for me.

6 – Are there any releases in particular that you would recommend as good ‘introductory material’ to the Cold Graey label?

It’s Stpocold again. And you definitely have to listen forthcoming Indu Mezu (EP “2019” is already released on web-label Pulsations For You) and Coph’antae Tryr, planned on november. These releases and the one of Myrrman are what I feel best and what I work for.

I’d act faster :) Everything in the past has built my present. Good things or mistakes – it doesn’t matter, they’ve done what they’ve done. I see the result, and I like it.

8 – An obvious question, but what is Cold Graey’s ‘relationship’ with the Internet? From promotion tool and digital sales to file sharing and piracy, how has it affected you?

I don’t believe in “evil pirates bleeding white”. I think, that they are friends of indies. Additional promotional tool, working itself. I usually track p2p for our releases and always pleased, when I find our music somewhere. It means that people like it. And sales… I feel just rising. Slowly, but rising.

As for digital sales, unfortunately it’s harder to organize it in Russia, than selling CDs. We still have problems with PayPal and so on. Side-sellers keep prices higher, than I’d like to do. But we have tried and will try again. It’s interesting in spite of the fact that our customers prefer beautiful package to faceless megabytes.

Oops, I’ve just started a netlabel myself! It’s based on Cold Graey, you can find the link there. I wanted to publish some archives and sold-outs. I love the idea itself. Now I’m listening a lot of free music and track some netlabels for new releases. This is the place to hear something really fresh and interesting.

About the evolution – even tapes are still alive! :) I think people like to touch things. Like to buy and have things. The CD must be designed better, that’s where the future is. Posters, buttons, strange boxes, anything to make a connection between a musician and a listener stronger. Selling tons of plastic circles is already pointless. But majors did not collapse when a tape appeared against vinyl, a CD against a tape, a CDr against a CD. It’s ok, nobody dies. And I see the evolution of net-releases. They are just files now, countless. But when they will be packed in digital boxes, that will be really great. Maybe you could feel it better then. I have some ideas, maybe in future…

10 – Perspectives for the future, what lies in the horizon for Cold Graey? Can you share some long-term goals and where would you like to see the label heading to?

I have at least two ideas for CD-releases – a split and a very impressive tribute (but I still keep the details in secret). Indu Mezu and Instant Movie Combinations are planned. Let’s hope, Stpocold too. It’s for 2009. In 2008 I hope to release the second album of Nedicry and the debut of Coph’antae Tryr. That’s all. But I always listen to demos and looking for new ideas.

Zhelezobeton and Abgurd at first. It’s always a good music. Mostly drone and noise. Then Dars Records (and the net label Pulsations For You) – for me it’s a perfect quality of sound design, lots of melodies which can catch you. It’s important! There are lots of “experimental” or “idm” stuff, you don’t want to listen to twice. But Dars Records produces real music, not just sounds. Last favourite of netlabels is Time Theory http://www.myspace.com/timetheorynetlabel. They release mostly ambient, drone and dark, but often with glitch inclusions and full of life. I’ve downloaded them all and listen gradually, day by day.

One of my favourite bands for last few months is The Slimp. I found the link on the net-release on Connexion Bizarre and bought the CDs gift pack immediately. They play death-rock with psychodelic influences – a piece of very strange, but organic mix.

May the Force be with you!