More recently notorious for his spoken wordcore performances as It-Clings, the man known just as Squid is also a veteran of the Canadian industrial music scene, having been one of the founders of the now deceased Toronto Industrial Kollective (T.i.K.). In 2004, he founded the label Bugs Crawling Out Of People releasing “Revelation” a compilation of music inspired by his own misantropic apocalyptic texts. Though not remarkably active release-wise, Bugs Crawling Out Of People has consistently released intense material which, despite a wide variety of styles, shares a visceral and deeply cynical vision of existence. 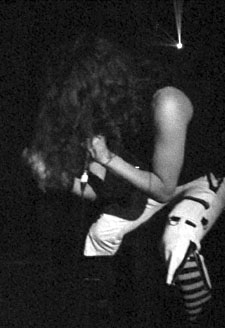 1 – How and why did you come about starting Bugs Crawling Out Of People?

Bugs Crawling Out of People was the next logical step after T.i.K. (the club night and event promotion group I started in 2001) ended. T.i.K. had already released 3 CDs in association with events it had put on and so moving directly into CD releases was not such a huge step.

2 – When you started Bugs Crawling Out Of People, were there any labels that you could say were a reference/inspiration for your efforts?

No. I think I had my own ideas.

3 – Almost mandatory question, how did the name “Bugs Crawling Out Of People” come about?

There was a long story about it and I answered it in a previous interview and I thought I still had it saved on my hard drive but it seems that I don’t. I searched the internet for it and its not there either (the internet does not contain enough information, you know!). This is actually what was delaying my answering these questions for so long. So instead of re-writing the whole story from scratch let me just sum it up as quickly as I can, which is with one word: drugs!

4 – Since the inception of Bugs Crawling Out Of People, are there any events in the history of the label that you’d consider as particularly relevant, from difficulties and setbacks to successes?

There’s always difficulties and set backs, but it seems like there are somewhat less of them lately, and more people understanding what it is that Bugs Crawling Out Of People is trying to do. It always seem like the reviews in the beginning aren’t as great as they could be and that it takes a while for people to understand. Lately the reviews have been great. There are too many people that view music as disposable. They just want a quick fix of friendly beats and not much else. I’d like to focus on discs that will have a more lasting value.

5 – So far what would you consider as special highlights (or successful) releases and artists in the history of Bugs Crawling Out Of People?

Everything on Bugs Crawling Out Of People is equally relevant and brilliant. I’ve searched the globe and only put out the best of the best (top 1.5%). So buy it (or illegally download it) it all.

6 – Are there any releases in particular that you would recommend as good ‘introductory material’ to the Bugs Crawling Out Of People label?

Hopefully Bugs Crawling Out Of People will be constantly evolving enough that there is no one release that sums everything up.

The new compilation Wake Up: Get Out of My Fucking House was designed as a sampler of sorts, so perhaps that’s the best one. However, does this represent Bugs Crawling Out Of People perfectly? No, not at all.

8 – An obvious question, but what is Bugs Crawling Out Of People’s ‘relationship’ with the Internet? From promotion tool and digital sales to file sharing and piracy, how has it affected you?

I’ve always said that I’m a terrible business man. I just don’t have the heart or the manipulative greed to be one. To be honest I don’t use the potential of the internet even 20% of what I could. But fuck that.

As for file sharing, I personally don’t really care. I’d personally love for people to illegally download everything I release. Download it and listen to it and enjoy it. But some of the bands who I release don’t share quite the same opinion as I do, so I have to balance my opinions with theirs.

I personally like to listen to things on my CD player. I like the idea of the album. I don’t just like listening to random tracks because I like the flow of an album, I like the way it’s designed and the placement. Listening to tracks on random seems to instant fix for me, it seems too disposable.

However, netlabels are kind of a cool idea. I sort of have this (unfortunately) materialistic ideology that things released on the net haven’t had as much care and thought put into them as ones released on cd or vinyl. However, there was a free net release called Mothers Against Noise released a while ago and the first track on it was absolutely killer. So perhaps I should adjust my opinion.

10 – Perspectives for the future, what lies in the horizon for Bugs Crawling Out Of People? Can you share some long-term goals and where would you like to see the label heading to?

I haven’t really thought out any long time goals. There are a pile of releases I’d like to put out in the near and far future. We’ll just have to wait and see if that actually happens.

I’m not one for letting the surprise out of the bag until I know for sure.

Nope. In fact, I’d like to unrecommend all other labels and every single artist out there. Stop listening to them! I think they might actually be plotting against us, filling our heads with some sort of subliminal filler, polluting us with confusing and possibly contradictory ideas in an attempt to distract us or to make us focus, or something.

I believe they might have some sort of click or glitch or something within their music that when it enters our brain, it start to form, starts to build something, and whatever that’s forming or building isn’t natural and isn’t right.

Stop listening to everything now!

Bugs Crawling Out Of People